Radio Facts: World Health Day 2016: WHO calls for global action to halt rise in and improve care for people with diabetes
First WHO Global report on diabetes: 422 million adults live with diabetes, mainly in developing countries 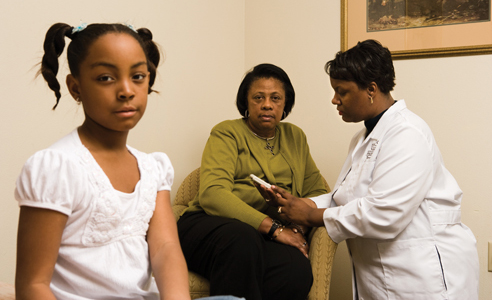 6 APRIL, 2016 | GENEVA – The number of people living with diabetes has almost quadrupled since 1980 to 422 million adults, with most living in developing countries. Factors driving this dramatic rise include overweight and obesity, WHO announced ahead of World Health Day.
WHO is marking its annual World Health Day (7 April), which celebrates the Organization’s founding in 1948, by issuing a call for action on diabetes. In its first “Global report on diabetes”, WHO highlights the need to step up prevention and treatment of the disease.
Health-promoting environments reduce risk factors
Measures needed include expanding health-promoting environments to reduce diabetes risk factors, like physical inactivity and unhealthy diets, and strengthening national capacities to help people with diabetes receive the treatment and care they need to manage their conditions.
“If we are to make any headway in halting the rise in diabetes, we need to rethink our daily lives: to eat healthily, be physically active, and avoid excessive weight gain,” says Dr Margaret Chan, WHO Director-General. “Even in the poorest settings, governments must ensure that people are able to make these healthy choices and that health systems are able to diagnose and treat people with diabetes.”
Diabetes is a chronic, progressive noncommunicable disease (NCD) characterized by elevated levels of blood glucose (blood sugar). It occurs either when the pancreas does not produce enough of the insulin hormone, which regulates blood sugar, or when the body cannot effectively use the insulin it produces.
Key findings from WHO’s “Global report on diabetes”
Among the key findings from the “Global report on diabetes” are:
The number of people living with diabetes and its prevalence are growing in all regions of the world. In 2014, 422 million adults (or 8.5% of the population) had diabetes, compared with 108 million (4.7%) in 1980.
The epidemic of diabetes has major health and socioeconomic impacts, especially in developing countries.
In 2014, more than 1 in 3 adults aged over 18 years were overweight and more than one in 10 were obese.
The complications of diabetes can lead to heart attack, stroke, blindness, kidney failure and lower limb amputation. For example, rates of lower limb amputation are 10 to 20 times higher for people with diabetes.
Diabetes caused 1.5 million deaths in 2012. Higher-than-optimal blood glucose caused an additional 2.2 million deaths by increasing the risks of cardiovascular and other diseases.
Many of these deaths (43%) occur prematurely, before the age of 70 years, and are largely preventable through adoption of policies to create supportive environments for healthy lifestyles and better detection and treatment of the disease.
Good management includes use of a small set of generic medicines; interventions to promote healthy lifestyles; patient education to facilitate self-care; and regular screening for early detection and treatment of complications.
Global commitments to reduce diabetes
“Many cases of diabetes can be prevented, and measures exist to detect and manage the condition, improving the odds that people with diabetes live long and healthy lives,” says Dr Oleg Chestnov, WHO’s Assistant Director-General for NCDs and Mental Health. “But change greatly depends on governments doing more, including by implementing global commitments to address diabetes and other NCDs.”
These include meeting Sustainable Development Goal (SDG) target 3.4, which calls for reducing premature death from NCDs, including diabetes, by 30% by 2030. Governments have also committed to achieving 4 time-bound national commitments set out in the 2014 UN General Assembly “Outcome Document on Noncommunicable Diseases”, and attaining the 9 global targets laid out in the WHO “Global Action Plan for the Prevention and Control of NCDs”, which include halting the rise in diabetes and obesity.
“Around 100 years after the insulin hormone was discovered, the “Global report on diabetes” shows that essential diabetes medicines and technologies, including insulin, needed for treatment are generally available in only 1 in 3 of the world’s poorest countries,” says Dr Etienne Krug, Director of WHO’s Department for the Management of NCDs, Disability, Violence and Injury Prevention. “Access to insulin is a matter of life or death for many people with diabetes. Improving access to insulin and NCD medicines in general should be a priority.”
Global efforts are underway to make medicines, including for NCDs, more available and affordable. Commitments from world leaders, including the SDGs, the 2011 “UN Political Declaration on the Prevention and Control of Noncommunicable Diseases”, the 2014 UN General Assembly “Outcome Document on Noncommunicable Diseases”, and the work of the UN Secretary-General’s high-level panel on access to essential medicines are aimed at improving affordability and availability of essential drugs for people living with diabetes.