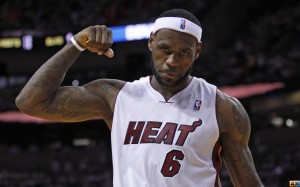 A few years back LeBron James announced that he was taking his talents to South Beach. Two chionships later, he has now proclaimed that he is taking his talents to the Starz network with a new show called, “Survivor’s Remorse.”  LeBron James is slated to serve as the executive producer on a half-hour sitcom.  The reigning NBA MVP will not star in the show but it is centered around the lives of two men from the streets who acquire fame and the many benefits and difficulties that come along with that lifestyle.  One  character seems to mirror LeBron’s life as an NBA star and the other character plays his friend although LeBron did say that this sitcom is not an autobiographical portrayal of his life.James told a reporter in a phone interview, “I think the main thing for me is, first of all, making it out of a place where you’re not supposed to. You’re supposed to be a statistic and end up like the rest of the people in the inner city — [and] being one of the few to make it out and everyone looking at you to be the savior,””When you make it out, everyone expects — they automatically think that they made it out and it’s very tough for a young, African-American 18-year-old kid to now hold the responsibility of a whole city, of a whole community. I can relate to that as well,” said James.He  is developing the show with his friend Maverick Carter; Tom Werner, the producer behind iconic shows like the everlasting “The Cosby Show” and  “Roseanne.”  Actor, Mike O’Malley will also serve as an executive producer and writer on the show.  LeBron James has always said he is trying to be the highest paid athlete of all time and maybe through this show he is getting a lot closer to his goal. We wish King James the best of luck in this endeavor.