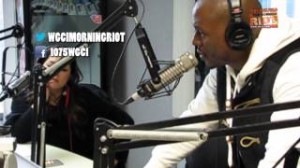 While Tyrese Gibson and Rev Run were visiting The Morning Riot crew on WGCI, he took time out to address the senseless murders going on in Chicago. He specifically mentioned the murder of Hadiya Pendleton that has recently received national attention. As the R&B crooner was there to talk about this new book “Manology,” he couldn’t help but call out President Obama, Oprah Winfrey, and the Chicago community. Watch the video and tell us what you think of Tyrese’s comments.

Tyrese had to say it so it can be heard? He is oh so correct, people wake up!

Spoken like a REAL MAN! Tell the truth Tyrese!!

Two questions: What does any of what Tyrese said have to do with Oprah and Obama–whom I think both do more for humanity than we might know–and what are YOU doing, Tyrese? You don’t have to be from Chicago to contribute. What are you doing about the situation in the city in which YOU live. It’s easy to blow into town to promote a book, speak a few noble morsels and be gone. I know a way
you can help–how about less songs the objectify young woman? How about telling some of your fellow entertainers to bring it down on the booty music and all the songs about “Da Club” that these kids embrace as the truth? How about less pointing of the finger and more doing on YOUR part? Black folk still in search of someone to LEAD them. Look in the mirror and do for SELF. We LIVE in these communities; we can’t do something about WHERE WE LIVE?