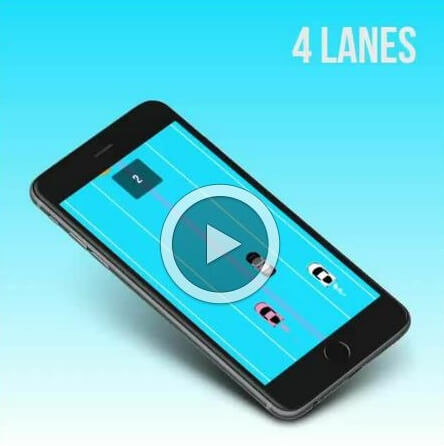 Producer and entrepreneur Jermaine Dupri and So So Def have partnered with That Level, LLC on the release of “4 Lanes,” an iOS game inspired by Dupri’s 1998 hit song “Money Ain’t A Thang.”
The rules of the game are simple: collect as much money as possible while staying away from “haters.” Beat your high score or your friends’ scores.
An avid gamer for years, Dupri first entered the gaming industry in 2000 when he produced the intro to EA Sports’ Madden 2000, which featured a then-unsigned Ludacris.
“Since day one, I’ve been focused on doing things that would put me in my own lane,” says Dupri, who founded the online music community Global14.com in 2010. “‘4 Lanes puts me in front of my peers in the gaming world and marries two of my passions: music and technology.”
“We wanted to work with JD because his music is fun, colorful, and vibrant, which makes for the perfect soundtrack to games,” says Will Willis, Strategy Director at That Level. “‘Money Ain’t A Thang’ fits so perfectly as the soundtrack to a driving game that it’s mind blowing. We also respect Jermaine’s business acumen and ventures into the tech world with Global14, so it makes sense for us to work together.”
Details for an Android version of “4 Lanes” have not been announced.
In addition to the app, Dupri is working on an EP entitled The Dark Recesses Of My Imagination.
“4 Lanes” is available for free on iTunes now.
Download “4 Lanes” here: https://itunes.apple.com/us/app/4-lanes/id961122685