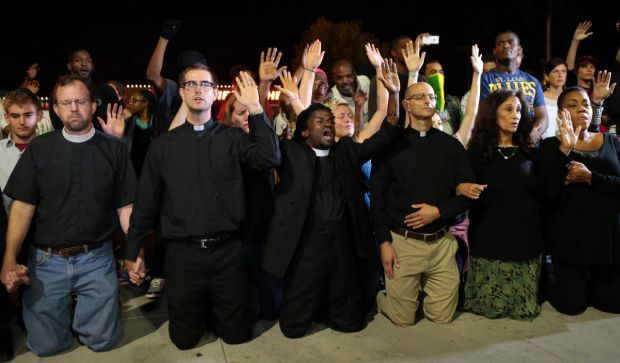 Hundreds of interfaith clergy members and seminarians from the PICO National Network, Sojourners, the Fellowship of Reconciliation and many more will join thousands of people from across the country who are heading to St. Louis this weekend to support local residents, activists and clergy organizing a series of protests, rallies and events entitled,“Ferguson October: A Weekend of Resistance.” The weekend actions follow more than 60 days of sustained local protests following the killing of Mike Brown by Officer Darren Wilson, the refusal to arrest or charge him, and the hyper militarized and unconstitutional response to peaceful protests (full schedule of faith events listed below).
Clergy leaders and religious organizers from multi-faith and multi-racial backgrounds are firm in their belief that police brutality and police homicide are an unconscionable moral issue, plaguing both Ferguson and communities across the country, as seen in the senseless police brutality that killed John Crawford in Ohio, Eric Garner in New York, and so many others.
Since August, faith leaders have been on the ground in Ferguson working with communities to support and amplify a long overdue conversation about policing and criminal justice. All activities are specifically shaped seeking justice for Mike Brown, and calling for the larger systemic reforms needed in order to ensure full dignity and respect in our communities of color through the accountability of police by local community review boards, and the transformation of national standards of policing. (click here for a full list of demands from the Organization for Black Struggle and the Hands Up, Don’t Shoot Coalition).
For updates, a full schedule of events, and compete list of endorsers, visit www.FergusonOctober.com
Schedule of Faith Events
Sunday, October 12
Event #1
WHAT: National Hands Up Worship Services
WHEN & WHERE: Services across the U.S.
WHERE: Locations & Times across the country
Event Highlights & Featured Speakers: Events at dozens of houses of worship across the country, declaring together that interfaith communities are working, praying and voting to create a nation that will no longer tolerate the violence, systemic injustice and marginalization suffered by poor people and people of color in our communities.
Event #2
WHAT: Mass Meeting on Ferguson: An Interfaith Service
WHEN: 7:00 PM – 10:00 PM
WHERE: St. Louis University’s Chaifetz Arena, 1 S Compton Ave, St Louis, MO 63103
*To schedule interviews contact Keiller MacDuff 202-679-2236.
Event Highlights & Featured Speakers:
Dr. Cornel West (Keynote Speaker), public intellectual, activist, author;
Jim Wallis, President and Founder of Sojourners;
Rev. Osagyefo Uhuru Sekou, Freeman Fellow, Fellowship of Reconciliation
Monday, October 13
WHAT: Moral Monday March: Part of the Ferguson October Day of Civil Disobedience
WHEN: 10 AM-12:00 PM
WHERE: Wellspring United Methodist , Ferguson, MO United States
*To plan interviews prior to the march and rally, contact: Kawana Lloyd, 202-544-8411, ext. 110. To schedule interviews on-site contact: Andrew Kling, 816-920-0370, [email protected]
Event Highlights: Standing with local clergy and young people, national faith leaders and clergy from across the country will gather in Ferguson for the Moral Monday March and civil disobedience, demonstrating their collective moral and spiritual voice. Marching together and holding the ground in a key location, these clergy will speak out against the police brutality that continues to plague the community and young leaders who’ve been at the forefront of the protests in St. Louis.