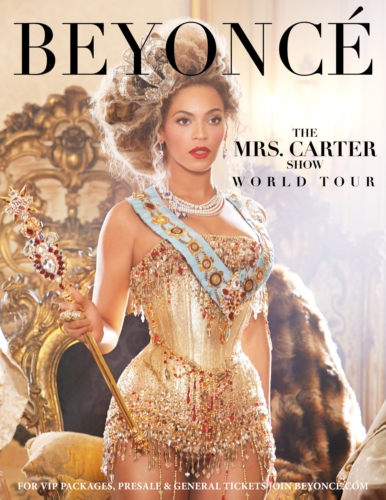 Parkwood Entertainment today announced that The Mrs. Carter Show World Tour starring Beyonce kicks off in Europe on April 15, 2013. With stops in twenty European cities, including Dublin, Ireland; Berlin, Germany; Paris, France and a four-night stint at The 02 in London, UK, this is Beyonce's first multi-city tour in over three years.Live Nation also announced today that Beyonce's North American Tour begins on June 28 in Los Angeles, California. The tour will travel to over twenty cities throughout North America this summer, including Brooklyn, New York at the Barclays Center, Atlanta, Georgia, at the Gwinnett Center, Houston, Texas at the Toyota Center, Toronto, Ontario at Air Canada Centre, and Boston, Massachusetts at TD Garden.On June 28, Beyonce returns to Los Angeles, California as part of the BET Experience At L.A. Live at the Staples Center. She is set to headline the first of the three-night STAPLES Concert series. And continuing her successful run at international music festivals, following a headlining night at Glastonbury in 2011, she is confirmed to headline at the world's largest music festival, Rock in Rio, on its first night,September 13 at the “City of Rock” in Rio de Janeiro, Brazil. Rock in Rio has set records for its massive crowds and its powerful media drive.The Mrs. Carter Show World Tour promises to be the entertainer's most ambitious undertaking to date. It is expected to be bigger in scope than any of her previous shows. Slated to run for almost one year, the second wave of the tour is planned for Latin America, Australia and Asia.Following her historic performance tonight at the Pepsi SuperBowl XLVII Halftime Show, in New Orleans, Louisiana, Beyonce officially returns to a full-time touring schedule, her first since the I AM”¦WORLD TOUR in 2009, with a new, bolder state-of-the-art production.Fans can join the Beyhive Blog for free at www.beyonce.com to access exclusive content, pre-sale tickets, VIP packages and more, including an exclusive MasterCard package to the Bey Stage. A limited number of tickets to The Mrs. Carter Show World Tour will be available early for purchase in the US and Europe. Fans can sign up now for the chance to be among the first to purchase tickets. Public sales for the European dates start on Friday, February 8. North American dates begin on Monday, February 11, 2013 at www.ticketmaster.com. Pepsi, MasterCard and Coty sponsor The Mrs. Carter Show World Tour . A complete list of tour dates, markets and on-sale dates follow. Additional information including on-sale times in all markets, available at www.beyonce.comBeyonce's last tour, the critically acclaimed and incredibly successful, I AM”¦WORLD TOUR was ranked #1 on Billboard's Hot Tour chart. The show thrilled more than 1.1 million fans at more than one hundred shows in 32 countries and six continents across the globe.Beyonce is one of the most widely recognized and highly respected women in pop culture. A solo recording artist, actress, philanthropist and businesswoman, she has released four #1 solo albums and has sold over 75 million albums worldwide. Her work has earned her numerous awards and accolades, including 16 Grammy Awards. Billboard named her the Top Female Artist and Top Radio Songs Artist of the 2000s decade. The Recording Industry Association of America also recognized Beyonce as the Top Certified Artist of the 2000s.The critics have consistently praised her energetic stage shows likening her to the best entertainers of the past with her own brand of sass and class that makes her the artist of the future. “Beyonce has a breathtaking need to entertain,” said Ben Ratliff of the New York Times and Chantal Eustace of theVancouver Sun summed it up writing, ‘Beyonce twisted all the theatrics into her musical performance flawlessly, demonstrating her many talents as an artist.”On February 16, HBO will premiere Life Is But A Dream, an intimate feature-length documentary film directed and produced by Beyonce for Parkwood Entertainment. The film provides unprecedented access into the on and off-stage world of the entertainer.The North American tour is promoted by Live Nation Global Touring and is produced by Parkwood Entertainment.