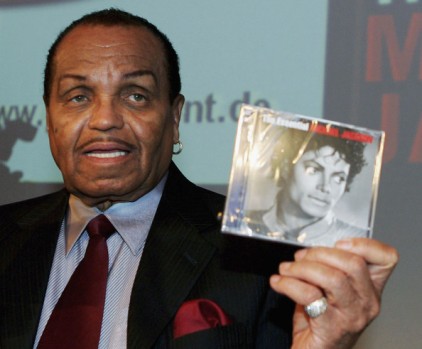 Joseph Walter Jackson, musician, boxer, talent manager and father of the Jackson family of entertainers has broken his silence as pertains to his superstar entertainer son Michael Jackson, who died suddenly in 2009.”They treated him like Howard Hughes,” the patriarch told Piers Morgan, referencing world famous aviator, filmmaker and philanthropist Hughes, who led an eccentric, secluded lifestyle during his final years. Hughes’ reclusive activities and speculated drug use were punctuated by a dramatic physical transformation as compared to the start of his life to its conclusion. “The family couldn’t get to him, you know, like they should have,” said Joe of Michael. “And that was very wrong for that to happen.”Michael notoriously went on record in terms of descriptiveness of the physical abuse he endured as result of father Joe’s hands. “Do it like Michael”, he described in terms of the senior Jackson’s demands for the kids, members of the successful singing group The Jackson 5, to dance well during rehearsal. Michael said he felt such critiques were most harshly directed toward his brother Marlon.84 year old year old Joe shared with Morgan on how he learned of Michael’s death: “I got a call from a fan. And he says, ‘Mr. Jackson, something is wrong.’ He said, ‘I see an ambulance there at Michael’s place. And the ambulance took off. And the fire department is following the ambulance. Something is wrong.'”Disturbing accounts of the upbringing style the senior Jackson employed have been criticized. Of this, Joe said: “I had to be like that way because during those times, it was hard, and you have a lot of gangs there, you know, in the area where we were living. This was Gary, Indiana, and I had to make sure that they didn’t get in any type of trouble, and things of that sort.” He expresses no regret and seems to take credit for his sons’ professional success. Joe aspired to be a professional musician himself and said: “I’m glad I was tough, because look what I came out with. I came out with some kids that everybody loved all over the world. And they treated everybody right.”Joe described his own childhood as a lonely one, and refers to his son Michael as “a nice guy.” Another Jackson, Janet, similarly opened up to Morgan in 2011, revealing how she was told to address her father: “One time I tried to call him ‘dad’. He said no. He said no, I’m Joseph, you call me Joseph. I’m Joseph to you.” Joe, the father of 11 (one child, Brandon, died at birth) explains: “You had all those kids running hollering around, They’re hollering ‘dad, dad, dad,’ you know, and it gets to be… It sounds kind of funny to me. But I didn’t care too much about what they called me, just as long as they able to listen to me and what I had to tell them, you know, in order to make their lives successful. This was the main thing. They never joined gangs or went to jail.”Of Michael’s legal troubles and child abuse allegations, Joe said: “Well, you know that there was a reason why that happened. They were trying to take control over Michael’s life. Michael has paid out a lot of money, you know, what is it? Something like $22 million, you know, to keep this thing hushed down.” Joe defends his son Michael who catapulted to fame at a very young age, describing him as “a big old kid himself” who “had the mind of a kid.”In summation, Joe said of Michael and his legacy: “I want everybody to care about him and to love him and keep doing the things that he wanted to do — and he wanted to make people happy all over the world.”