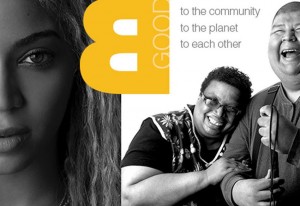 After being criticized by Harry Belafonte for not being a stronger voice for this generation, it seems as if Beyonce and Jay-Z are trying to step their game up. Whether Cuba was just a vacation for the power couple or not, they find themselves being in the middle of talks to finally open up trades between Cuba and the US. That is using your power for good whether it was purposeful or not and now Beyonce has now linked up with Goodwill for good cause to help transforms the lives of the unfortunate.Goodwill Industries International is pleased to announce that Beyonce Knowles-Carter will lend her voice to help raise awareness about Goodwill’s mission of transforming lives through the power of work. The announcement comes just as Beyonce gets ready to kick off The Mrs. Carter Show World Tour today in Serbia.”Goodwill helps people get back to work by providing education, job training and placement. I wanted to team up with an organization that puts people first and works every day to help them improve and re-establish their lives,” said Beyonce.Beyonce will encourage fans to support Goodwill by promoting donation drives at her North American concerts beginning on Friday, June 28, at the Staples Center in Los Angeles. Goodwill will host a mobile donation center onsite at 28 tour venues in 24 North American cities, collecting clothing, electronics and small household goods. The revenue from the sale of these donations will directly benefit local Goodwill agencies in their work to help people with disabilities and disadvantages, and anyone facing challenges to finding employment.Beyonce will also help build awareness of Goodwill’s mission through in-concert education, social media and online ticket auctions. Global charity auction site Charitybuzz.com will auction special ticket packages for The Mrs. Carter Show World Tour, with the revenue benefitting Goodwill.Every 38 seconds of every business day, a person served by Goodwill is placed in employment. Goodwill promotes independence and dignity for people who need support to provide for themselves and their families. When people donate to their local Goodwill, they play a vital role in fulfilling this mission. Financial donations and the revenue generated from the sale of used goods helps to sustain skills training, career placement services and job opportunities, and support services such as career counseling, access to free tax preparation and financial coaching. Members of the public can do their part to support Beyonce’s efforts by giving goods, giving financially, or giving their voice to increase awareness of Goodwill’s mission of transforming lives through the power of work.Beyonce will also support and advocate on behalf of other local charitable agencies involved in job creation and employment services during the overseas portion of her tour, to bring to light the importance of economic independence and an increased quality of life for those in need around the globe.”We face a jobs crisis in the U.S. and around the world that threatens the future and the potential of our families and communities. Through Beyonce’s platform, we will be able to increase knowledge of the positive impact Goodwill has on communities, the environment and the lives of the millions of people we serve each year through education and skills training, many of whom have been unemployed or underemployed for long periods of time,” said Jim Gibbons, president and CEO of Goodwill Industries International. “We cannot begin to express our sincere gratitude to Beyonce for her generous support of Goodwill and for showcasing Goodwill’s far-reaching programs and services that change lives each day.”