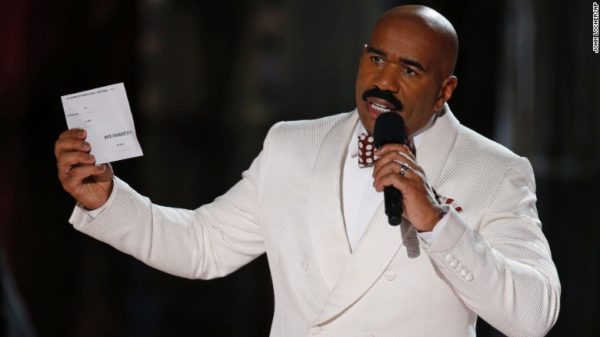 Apparently unfazed by the massive error from the most recent Miss Universe pageant, officials have to nonetheless be outrageously impressed with the ratings and the publicity. steve harvey quickly turned lemonaid into lemons by taking full responsibility for the mistake on the show and in a press conference after the show. Harvey had already been signed to a multi year contract to host according to Entertainment Tonight.
The faux pas managed to be the headline for almost every major and idependent news outlet in the world. Miss Universe officials could not PAY for that kind of publicity or interest. In the end the whole fiasco worked out in everyone’s favor, the winner, Miss Colombia, who people sympathised with will be seen everywhere next year and Steve’s brand just got much bigger. EUR web exclusively reported earlier today that during an interview with Jim Rome’s CBS Sports Radio Show, Mark Shapiro, chief content officer for “Miss Universe” owners WME | IMG, said the “Family Feud” host was “very remorseful” about the error and that Harvey was “absolutely” welcome back to host the 2016 pageant in Belize.
Shapiro said Harvey “did a great job. He was funny, he was informative, he’s high energy, he’s got a great following… I definitely want him back, and I would hate to see him not come back. He’s going to want a shot to redeem himself.”
Read more at https://www.eurweb.com/2015/12/miss-universe-pageant-invites-steve-harvey-back-to-host-next-year/#qhtGlPyTJcuUGryy.99