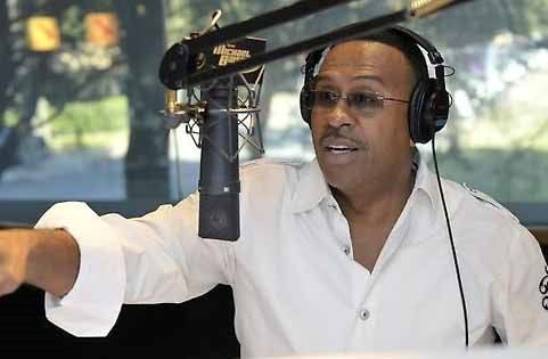 Washington, D.C., (January 9, 2017) He’s back! “The Bad Boy of Radio” Michael Baisden is making his long awaited return to the airwaves on WHUR 96.3FM – Howard University Radio Network. The new syndicated “Michael Baisden Show” is set to re-­‐launch Monday, January 16th weekdays from 3 p.m. to 7 p.m. Baisden is no stranger to WHUR’s “Adult Mix.” His nationally syndicated program aired successfully on the station from 2005 to 2013.

“We are very excited to have Michael back in our program line up and we look forward to the same ratings success he enjoyed in previous years,” said WHUR General Manager Jim Watkins. Baisden will be joined on the show by his sidekick George Willborn, “The Stress Reliever,” who is a fan favorite for Washington listeners. The program, provided by Superadio Networks in conjuction with American Urban Radio Networks, will be heard in some 40 other cities nationwide and will maintain its mixture of R&B music with relationship talk, politics, hot topics, and activism.

A Chicago Native, the 53-­‐year-­‐old Baisden’s, road to success began in 1995 with the self publishing of his first book, “Never Satisfied: How and Why Men Cheat.” He has gone on to write a host of other books, including “Men Cry in the Dark,” and “The Maintenance Man.” The latter two books have been adapted to stage plays. Baisden’s addition to WHUR rounds out the station’s weekday programming that include the “The Steve Harvey Morning Show” from 6 a.m. to 10 a.m., “The Triscina Grey Show” heard from 10 a.m. to 3 p.m., the “Daily Drum” with newsman Harold Fisher at 7 p.m. and the “Original Quiet Storm“ with Jeff Brown from 7:30 p.m. to 12-­‐midnight. 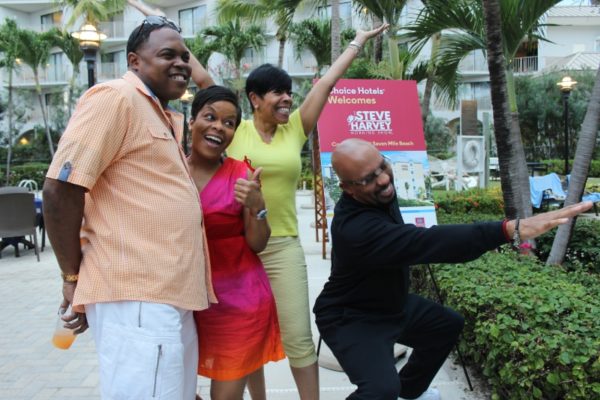 Co-hosts of The Steve Harvey Morning Show (L-R: Kier "Junior" Spates; Monica Barnes, producer; Shirley Strawberry; Thomas "Nephew Tommy" Miles) (PRNewsFoto/Choice Hotels International, In)[/caption]The Comfort Suites Seven Mile Beach in Grand Cayman received special star power this week with a surprise visit of multi-award winning entertainer, author and philanthropist Steve Harvey. Mr. Harvey joined his radio co-hosts Thomas "Nephew Tommy" Miles, Shirley Strawberry and Kier 'Junior' Spates at the recently renovated tropical hotel for a live poolside broadcast of the highly acclaimed Steve Harvey Morning Show, one of the top-rated morning radio programs in the United States.The visit took place during two days of previously scheduled live programming of the Steve Harvey Morning Show featuring the radio co-hosts broadcasting live, poolside, at the recently renovated Comfort Suites Seven Mile Beach to detail their experience at the hotel and around the Caribbean island."I couldn't let my crew come down to the Comfort Suites Seven Mile Beach without me," joked Mr. Harvey. "That's just cold. They were leaving me in the snow while they came to Grand Cayman to play in the sand. Who wouldn't want to spend a few days in paradise with good friends? I'm steps from the one of the world's greatest beaches here. Plus, Choice Hotels has taken good care of mine and Marjorie's Foundation and youth mentoring programs for years now. I am so happy to support a business that supports the community."Comfort Suites is one of eleven global brands franchised by parent company, Choice Hotels International, Inc. (NYSE: CHH), one of the world's leading lodging providers. The company has had a long standing philanthropic relationship with Mr. Harvey, contributing hundreds of thousands of dollars and in-kind donations to the Steve & Marjorie Harvey Foundation, most notably through its loyalty rewards program, Choice Privileges."Choice Hotels and Comfort Suites Seven Mile Beach are so excited to extend a warm welcome to Steve Harvey," said Anne Smith, vice president of brand strategy for Choice Hotels who was a guest of the hotel at the time. "Choice prides itself on being able to bring people to people, not just places. We love that our hotels foster human connections. Steve Harvey, with his warm, trusting and friendly persona, really embodies that. Between his daytime television program, game show, movie projects, books, radio show and community service -- you name it -- Steve Harvey has so many responsibilities! We are so thrilled and honored he chose to spend time with us and to do the show from here."

Is Steve Harvey Planning an Exit from Radio Show? 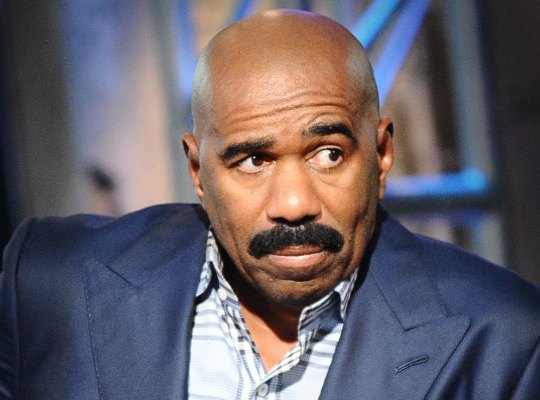 Now that J Anthony Brown will be a permanent fixture on the Steve Harvey Morning show, industry insiders are speculating that this the beginning of Harvey exiting the morning show host post on the show.It no secret that Harvey was rarely in the Atlanta radio offices to record with the rest of the crew for quite some time. He's got WAY too many irons in the fire right now, in addition, Harvey has constantly been at the forefront of controversy over the last few months regarding negative statements about Asian men, his visit to Trump Tower cheesing it up with Donald Trump, his lawsuit to keep a videographer from releasing footage of Harvey allegedly telling the black audience to 'spit on white people,' the severing of his business relationship with the man largely responsible for Harvey's success, Rushion McDonald this past year which led to The Neighborhood Awards being cancelled and now the controversy surrounding Harvey asking listeners to respect Trump which has gotten backlash from fellow comedian D.L. Hughley who is garnering greater respect as a community advocate as well as radio host..Putting J Anthony Brown on the show would appear to be an indication that Steve is ready to have someone in his place so that he can focus on other things (like keeping his mouth shut)(lol). No doubt, it's a brilliant move by Harvey's camp since Brown left competitor Tom Joyner a few months ago. The audience is very familiar with Brown and he can certainly carry the show on his own. We're not sure how this makes Nephew Tommy, Carla Ferrell or Shirley Strawberry feel since they are all vets of the industry and the show and were doing a lot of the fill in work when Harvey was not in. The general radio rule is you work hard and you are the first pick when an opportunity comes up but that's not the care here.  From a radio perspective, this is a slap in the face to them but we can't blame Harvey for making Brown his choice as another slap in the face (or a score) on his competition and "friend" Tom Joyner . At the end of the day, it's all business.J ANTHONY BROWN ANNOUNCES NEW GIG ON STEVE HARVEY MORNING SHOWIn addition, radio stations would more likely to accept Brown as a replacement since he has a proven track record and is an audience favorite. What is it like to work with Brown? We won't address that but time will tell. One thing is for sure Brown is a great comedian and much funnier off the air but we understand his limitations. Harvey's show is moving to LA from Atlanta in May (if not sooner, since Brown officially starts on April 18) so this will all be very interesting. Our prediction? Harvey will leave a majority of the morning show in Brown's hands by the end of the year.

Rudy Rush and Claudia Jordan Break Down How Their Show Will be Better than...

Steve Harvey Morning Show Digital and Radio Facts - Modified date: January 27, 2020 1
Claudia Jordan states that most syndicated shows don't have strong female leads and that the women are often thrown into the fold to giggle and cackle at the male lead's jokes limited her ability to grow. We agree with that. To that end, I ain't tryin' to starts no shyeat but Rudy and Claudia are replacing the Steve Harvey Morning Show in Dallas ..... because..... Look, draw yo own conclusions. See vid

Where is Michael Baisden? Joyner Pissed at Stevie Wonder?

Steve Harvey Morning Show Digital and Radio Facts - Modified date: June 5, 2020 5
I have not heard Micheal Baisden's name or show mentioned in months until now. His show was just dropped by KDAY. I guess that's not news since KDAY has dropped just about all of its syndicated shows but why have we not been hearing Baisden's name lately? Out of all the syndicated shows, I realized Baisden is the only one that has no entertainment history. I know he wrote books ...
123...9Page 1 of 9