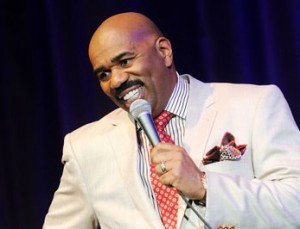 Congrats to Steve Harvey who just got piked up by ten NBC owned TV Radio Station s  for a fall 2012 launch, it was announced by Barry Wallach, president of NBC Universal Domestic TVDistribution.

“Steve Harvey is a phenomenal broadcaster who will deliver his unique comedic approach to daytime talk,” said Wallach. “Steve appeals to a wide cross section of daytime viewers making him a great fit for the day part.”

Harvey is an executive producer along with  Rushion McDonald. The show is distributed in broadcast syndication by NBC Universal Domestic TV Distribution.