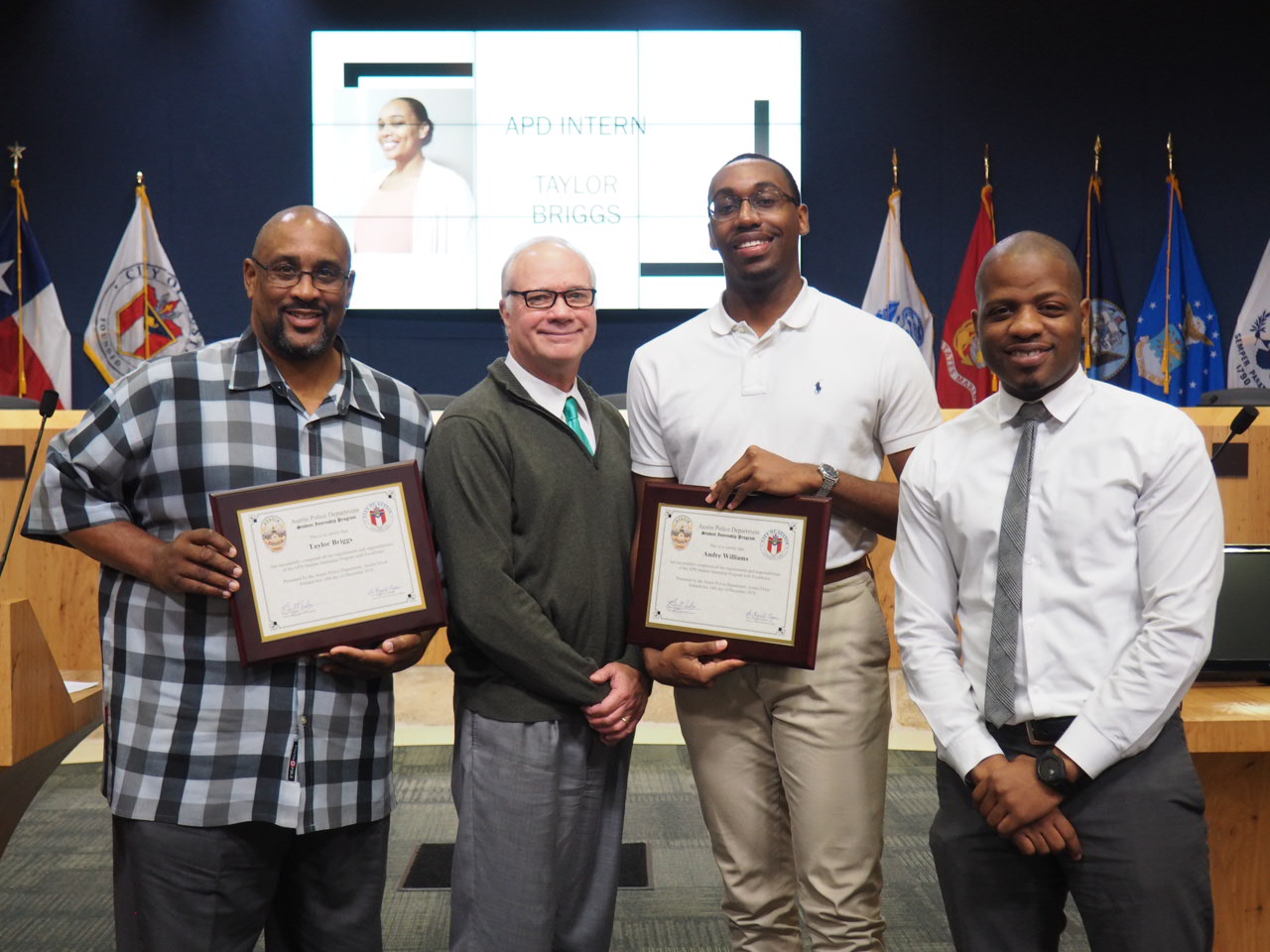 From left, William Hill, assistant women’s basketball coach, Dr. Michael Hirsch, dean of the College of Arts and Sciences, Graduating Senior André Williams (criminal justice major), Steven Hatchett, director of career services and graduate development, and Taylor Briggs (pictured at back), a graduating senior (criminal justice major) who was unable to attend due to being away with Huston-Tillotson’s basketball team for a game in New Mexico (won 60-59); Coach Hill stood in her place.

AUSTIN — On Friday, December 14, the City of Austin honored four students who were members of the inaugural Austin Police Department’s Internship Program. The paid internship took place over two weeks and gave two Huston-Tillotson University graduating seniors and two high school seniors the experience of a lifetime. Students were up close and personal with real police situations throughout their internship, from recordkeeping to homicides and organized crime.

At the ceremony, students gave five-minute presentations on their experiences. Taylor Briggs, in “genius generation” fashion, after knowing she would be unable to attend, pre-recorded her audiovisual presentation for attendees.

Highlights from her experience included creating new relationships with different ranking law enforcers, exposure to various crimes and how handled, the ability to use information obtained in her Huston-Tillotson classes, and determining her career path.

André Williams also shared about his experience. He stated that the internship opened his eyes to a lot of things that he did not know about the police department. Although his career track is to become an attorney, Williams found value in seeing the importance of preserving evidence for the state to bring a case against the accused. Williams also noted that Huston-Tillotson’s professors “did a great job with showing us the skills needed to do the job. They made classes challenging so that we can go out and do our best job.”

Austin’s Mayor Steve Adler gave remarks about the program. He stated that creating an internship with the police department was a priority. One reason that he gave was that the internship helps bridge information so that people could learn about what happens in the city and the police department. “We have young leaders coming into our space,” Mayor Adler said.

City Manager Spencer Cronk added, “This (internship) is a big deal for the City of Austin because we are striving to make our services accessible to anyone. We want people to understand how city government works. We want to make this department more inclusive.”

Finally, Chief of Police Brian Manley shared that the internship program helps further the department’s work in community policing. Thank you for being our inaugural class. This is important to the city. Nothing gets done without the people you surround yourself with.”

Interns who complete the program receive course credit and a guaranteed spot in the police academy.

At least two more Huston-Tillotson University students are on track to join the program in the spring semester. HT