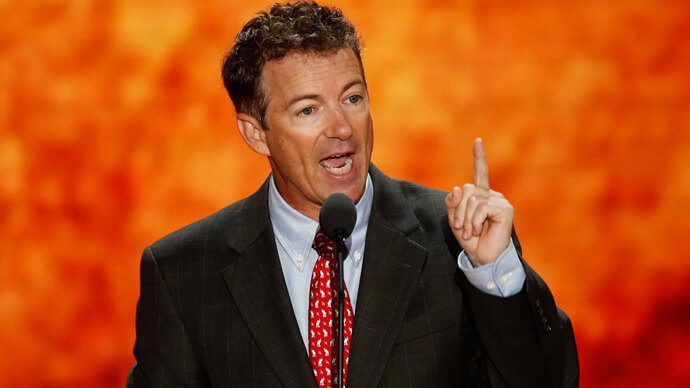 The Democrats are trying to make a strong case as to why Rand Paul can’t be trusted in regard to Voter ID Laws designed to keep certain voters from the polls. According to the Democrats, Rand Paul likes to say that he’s a different, new type of Republican who can appeal to a broader electorate, but he has demonstrated time-and-again that when it comes to the issues, he’s the same type of far-right Republican that voters have continually rejected.

Voter ID is important. As are other Republican tricks in areas with significant African-American voters like limited early voting schedules, early poll closings, and the manufacture of long lines at polling Radio Station s. The Republican party is confronting a choice as demographic shifts work against them: it can either try to expand its base by making inroads with racial minorities, or it can try to impose restrictions to chop the Democratic electorate down to a smaller size.

Paul’s walk-back, along with basically everything else in Republican politics, suggest the party’s heart is still determined to see through the second option.Rand Paul’s sad voter ID walk-back: What it reveals about GOP’s futureSalon // Jim NewellAs demographics change, GOP has a choice: reach out to minorities, or block their vote. Paul’s move speaks volumesSen. Rand Paul ostensibly wants his party to make an effort to reach out to African-American voters.

That’s theoretically a good thing, and not something that should be difficult given the low bar the party has set in previous decades: just doing a few events before African-American audiences would be a start. Rand Paul is now at least two-thirds of his way towards “a few.” He spoke to students at Howard University last year and to a group of black pastors in Tennessee last week. The Howard episode was considered a flop, even by Paul himself.

Instead of hearing concerns and showing growth on issues of importance to African-Americans, he rattled off the same old tiresome lines that Republicans use to convince themselves that Democrats are the real racists: The NAACP was founded by Republicans, Lincoln freed the slaves and was a Republican, Democrats were the party of Jim Crow — the sort of stuff that means nothing because of the major party realignments in the 1960s and 70s following the passage of civil rights laws and Richard Nixon’s “Southern Strategy.”

The audience laughed at him. As Mother Jones’ Adam Serwer wrote at the time, Paul did not “deserve a gold star” just for speaking at an HBCU if this was the best he could offer. But last week’s episode in Tennessee offered some positive signs of progression: admitting that a popular policy among the Republican party might negatively affect African-Americans. The policy he was discussing was voter ID laws that have suddenly become popular in red states — supposedly over an epidemic of rampant voter fraud that just isn’t there.

Voter ID laws do, however, effectively disenfranchise large segments of racial minority populations that, coincidentally, tend to vote for Democrats as the older, whiter Republican voter base shrinks. Few if any major Republicans had taken a stand against the party’s push for these laws.

So it appeared that Paul was actually breaking meaningful ground last week when the New York Times reported these comments: Senator Rand Paul of Kentucky broke Friday with fellow Republicans who have pushed for stricter voting laws as a way to crack down on fraud at the polls, saying that the focus on such measures alienates and insults African-Americans and hurts the party. “Everybody’s gone completely crazy on this voter ID thing,” Mr. Paul said in an interview.

“I think it’s wrong for Republicans to go too crazy on this issue because it’s offending people.”Mr. Paul becomes the most prominent member of his party — and among the very few — to distance himself from the voting restrictions and the campaign for their passage in states under Republican control, including North Carolina, Ohio and Wisconsin, that can determine presidential elections. Civil rights groups call the laws a transparent effort to depress black turnout.

Paul’s motives for holding such events and saying such things may not be entirely pure. Some might suggest that he’s trying to do juuuust enough outreach to African-Americans to inoculate himself against charges of racism during a presidential bid, stemming from his past comments on the Civil Rights Act, his staffing of the “Southern Avenger, and his father’s dalliances, to put it generously, with racism. But still, he said these things about voter ID, and that’s all that counts.

Until he quickly unsaid them, of course, in gargled walk-back from his PAC director: Senator Paul was having a larger discussion about criminal justice reform and restoration of voting rights, two issues he has been speaking about around the country and pushing for in state and federal legislation. In the course of that discussion, he reiterated a point he has made before that while there may be some instances of voter fraud, it should not be a defining issue of the Republican Party, as it is an issue that is perhaps perceived in a way it is not intended.

At no point did Senator Paul come out against voter ID laws. In terms of the specifics of voter ID laws, Senator Paul believes it’s up to each state to decide that type of issue.Sigh. Now we’re all the way back into the cozy confines of the states rights cop-out, replete with a strange excuse about how, since these laws are offending people, the GOP should probably keep them on the DL.

And to complete the walk-back and return full circle to his sad, sad Howard appearance last year, Paul appeared on Fox News last night where he returned to Democrats are the real racists. “There was a time in our history when the vote was suppressed,” he tells Greta Van Susteren.”Actually, it was mostly by Democrats back then.” So, Rand Paul isn’t quite ready to make a real push for changing the racial dynamics of the party system just yet.