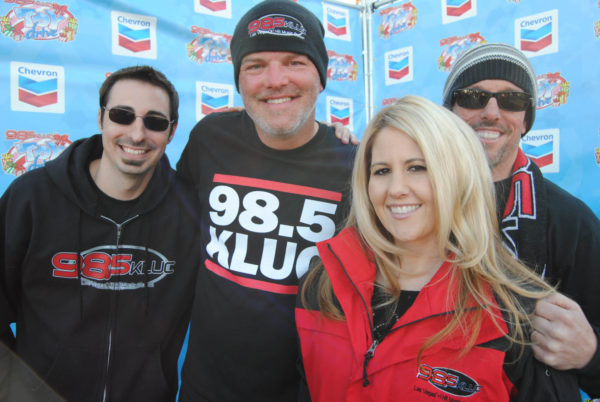 Las Vegas, NV – CBS Radio Las Vegas and Chet Buchanan & The Morning Zoo have signed a new multi-year deal that will continue to have them waking up Las Vegas on 98.5 KLUC. The show, produced by Davey The “Showkiller”, has been heard on 98.5 KLUC since its debut in 1999. “We are beyond excited that the longest running and most successful Morning Show in Las Vegas has decided to stay at KLUC!” says, Cat Thomas, KLUC Program Director. “Their ability to be such a major part of our community on a daily basis has brought them to the pinnacle of success in one of the most competitive radio markets in the country. Like all of Las Vegas, we love them and are so happy to continue to work with the amazing talents that are Chet, Lauren & Spence. Chet Buchanan & The Morning Zoo is back, we got them and we’re happy as hell!” The show has become engrained in the Las Vegas community over the last 16 years in large part due to the love and support they have for their listeners. Chet, Spence and Lauren are involved with countless charities throughout the valley and spearhead one of the largest single location toy drives in the country. 98.5 KLUC’s Chet Buchanan & The Morning Zoo Toy Drive just celebrated its 16th year this past December by breaking all previous records over the course of the 12 day event that included filling (29) 50-foot semi truck trailers with toys, collecting 5,146 bikes and raising $323,092 in cash and gift cards. “It seems like it was just yesterday that we joined together! We’re proud to be Las Vegas’ longest running morning show with the most fantastic listeners anywhere, and we’re only getting better every day,” says Chet Buchanan. “Thank you to CBS Radio, our Senior Vice President/Market Manager, Jerry McKenna, and our esteemed fearless leader and Las Vegas Radio Legend Cat Thomas for the opportunity to stay together for another three years!” Chet Buchanan & the Morning Zoo can be heard we