2021 is not just our first post-pandemic year, but also a helluva time for female comedians, aka comediennes. It’s been a building trend that looks like it’s finally arrived.

Not only are women as funny as their male counterparts but have also proven to be just as innovative and even more omnipresent. 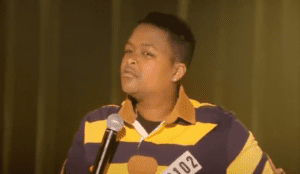 When you stop to consider that the most awarded comedian is a woman (Whoopi Goldberg is the only comedian with the coveted EGOT – Emmy, Grammy, Oscar, Tony) it’s no surprise that her sisters emulate her diversity.  Many are writers as well as stand-ups and actresses, placing them on both sides of the camera and major roles in the future of the medium.

Sam Jay is a prime example of the new wave of comedians.  She began her comedy journey in 2012 and has amassed 2 Emmy nominations for writing and one from the Writer’s Guild.

She has the distinction of being the first Black lesbian staff writer for Saturday Night Live and her stand-up puts her in a unique position as well.

Sam Jay talks big trash.  Her aggressive brand of observational comedy separates her from most of her female colleagues and her wit and insight blow away many of the males.

The Atlanta, Georgia native received raves from her appearance at the Just for Laughs Comedy Festival in Montreal and went on to perform on Jimmy Kimmel Live, The Comedy Line Up and Comedy Central Stand-Up Presents . . .

Her one-hour Netflix comedy special Sam Jay: 3 in the Morning was released in August 2020 and Jay’s half-hour HBO series entitled PAUSE premiered in 2021.

This New Jersey native is of Haitian, Lebanese, French, and Jamaican descent.  So, it was either become a comedian or get a job at the UN.

She began performing right after 9/11 and simmered for a long time before her first big break on Comedy Central, then the dominoes fell.

Esquire Magazine listed her as a comic to watch.  Time Magazine called her podcast, Late Night Whenever, one of the best out.

She did Comedy Line Up on Netflix and films: Someone Great, Sell By, Isn’t it Romantic, Always be My Maybe.  Buteau co-hosted the podcast, Adulting with Jordan Carlos and 2 television series: Tales of the City and First Wives Club.

She hosts The Circle on Netflix, published a book, and won the Critic’s Choice Television Award for Best Comedy Special.

Johnson was born Jessica Williams and raised by her mother in New Orleans, Louisiana.  When she started out as a stand-up comedian, she went to the Comedy Store and became a paid regular.

She appeared just for laughs and not long after was cast as a member of the Saturday Night Live ensemble, making her the second Black LGBT female in the show’s history.  Johnson’s TV series work includes Space Force, A Black Lady Sketch Show, Corporate, Allen Ruins Everything

Nwodim is Nigerian and has a Biology Degree. When the comedy bug bit she took it seriously and studied comedy at the Upright Citizen’s Brigade Theatre in L. A. where she performed her one-woman show, “Great Black Women . . . and Then There’s Me”.  Just For Laughs Comedy Festival named her a New Face and she wasted no time in getting in ours.

She’s roasted celebrities and appeared on podcasts. However, her biggest achievement so far was being made a repertory player on Saturday Night Live.

2020 made Majimbo a product of Covid. She became an Internet sensation with her series of quarantine videos which caught the eye of celebrities such as Snoop Dogg, Cassper Nyovbest, and Lupita Nyong’o.

They also got the attention of major sponsors like Fenty and MAC.  She is an ambassador for both.

Her monologues have been featured on Comedy Central and she received the People’s Choice Award for Favorite African Social Star in 2020.

This comedian is a linguistic chameleon.  Born in London from a Nigerian parentage, Abdul Rashid mixes the many elements of his act.

He’ll effortlessly speak French, Patois, Urdu, Somali, or Chaucer to pull the audience into his bits about being a Black Muslim in South London.

His activist stance put him in high demand. Rashid has appeared at the Comedy Café, Comedy Store, Jongleurs, and the Choice FM Comedy Club.

He wrote, directed, and acted in The Show Sho Show. He’s penned material for comedians on panel shows and sketches. Rashid toured with his religious comedy show, “Don’t Panic, I’m Islamic”, done tours with other Muslim comedians, and was placed on Britain’s Got Talent.

In a world dominated by slapstick and toilet humor, Chaponda is a comedian who takes his influences from literary titans George Bernard Shaw and Roald Dahl.  He’s a Zambia-born Malawian living in London – prime comedic combination.

His father was appointed Minister of Foreign Affairs ad Minister of Education, which afforded his son, Daliso, many academic advantages, which he utilized.

However, he took his stand-up very seriously.  He concentrated on establishing himself in comedy through one of the many paths of progression – he focused on open mics, then club gigs, then opening for musical acts, and finally his own tour.

His career was almost sidelined for making fun of the Malawian flag – a cultural no-no that almost got him arrested. Once past that speed bump, Chaponda wrote for BBC Radio 4, had a great showing on Britain’s Got Talent and landed his own show on the BBC, “Daliso Chaponda: Citizen of Nowhere”.

There are few overnight successes, but successes sprung overnights of putting out quality work.  Arnold fits this category.  A brilliant writer and stand up he has been a major supporting player for marquee names and comedic foil to some of entertainment’s hottest names. Now it’s his turn.

As a writer David A. Arnold is a machine, having supplied words and situations for Meet the Browns, The Rickey Smiley Show, Raising Whitley, and Tyler Perry’s House of Payne.

Now Arnold has his own Netflix special, David A. Arnold: Fat Ballerina so the world can finally behold what all the behind-the-scenes fuss has been about.

The Jamaican/Cuban/Puerto Rican/Spanish/ Nigerian has just as many talents as heritage streams. Hughes is a comedian, writer, presenter and anything else they’ll throw at her.  When she wrote and starred in Laughter Shock, for the BBC she planted her name and then she made it grow.  Hughes cut her teeth in children’s television and on stage won the London Comedy Store’s Funny Women Award. She was a force on audio comedy due to her presence on BBC Radio 4 and the several broadcast programs she wrote and starred in.

Hughes has done film, a recurring television role, podcasts, and sketch shows.  She even had a deal to make a special with herself and Whoopi Goldberg (who agreed to do it), but no channel was interested.

Regardless, Edinburgh was interested in Hughes, and she shot her first show at the Fringe Festival in 2017, London Hughes: Superstar (it’s just nobody realized it) and then her signature piece in 2019, London Hughes: To Catch A D*ck, that got adapted into a Netflix special as well as making Hughes the first black nominee for the Edinburgh Comedy Award.  So apparently the beat goes on. Next stop – co-starring in the upcoming reboot of Perfect Strangers for HBO/Max with Robin Thede.

Edebiri is a utility comedian. Whatever you need, she can do.  She’s a writer, producer, actress and she does stand up and these are not token titles.

She interned at the Upright Citizen’s Brigade and then this product of Boston appeared on Comedy Central’s Up Next, replaced Jenny Slate on Big Mouth, when she stepped down so a Black actress could play the part of Missy, was the television writer for the series, The Rundown with Robin Thede and Sunnyside.

She was the lead as well as a writer for Dickenson’s and is working on 2 Netflix animated series, as a voice-over and writer.

She has a role in the upcoming film, Hello, Good-bye, and Everything in Between as well as continuing her co-hosting duties on her popular podcast Iconography alongside Olivia Craighead.

Seven out of this list of 10 are women and comedy couldn’t be prouder.  There should always be equality in the arts.

Aesthetics has no place for prejudice or a Neanderthal frame of reference.  If we are to benefit as a culture and society all viable options should be at our disposal and we, the public should make the decision who we want to push . . . into our homes, vehicles, and various media outlets.

The main thing, male or female is to make us laugh, contribute to the craft, and inspire those out there trying to make a list for next year.

For the Interracial Couple with the Slave-Themed Wedding Photos, A Scene from 1975’s Movie “Mandingo” (video)