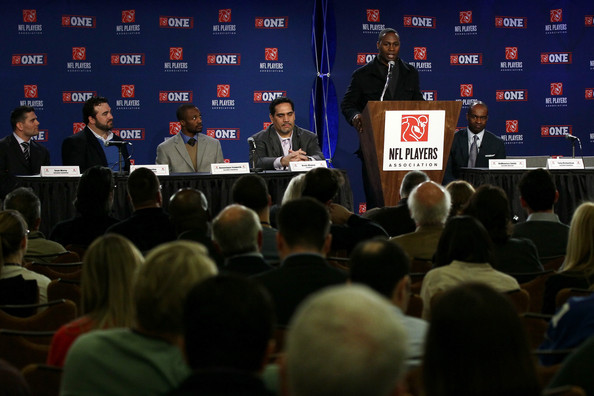 Athlete Content & Entertainment (ACE Media) launched as a new, original content business that will identify and create programming opportunities for athletes around the world. With consumer demand for exclusive, high-quality sports-related content at an all-time high, ACE Media will begin by leveraging the NFL Players Association’s (NFLPA) exclusive group player rights and access to more than 1,800 active players to produce compelling sports-lifestyle content focused on athletes, whom fans would otherwise know solely through their statistics and game highlights.
The NFLPA will be the majority shareholder in ACE Media, working in collaboration with strategic media and sports partners.
“Like all athletes, NFL players are an extraordinary group of people with an incredible range of talents, passions, perspectives and backstories. Many of those stories have flown under the public radar,” says Ahmad Nassar, a member of ACE Media’s Board of Directors and President of NFL Players Inc., the NFLPA’s for-profit marketing and licensing arm. “ACE Media will aim to unlock those stories for diehard and casual fans alike and will reach new audiences as well by casting athletes in a light that allows their off-the-field attributes to amplify and complement their on-field accomplishments.”
ACE Media has already forged strategic partnerships with a broad range of media entities to provide athlete-driven programming. These include distribution channels such as BET Networks, Bleacher Report, The Players’ Tribune and 120 Sports; producers such as Tongal and Academy Award winning producers Ed Cunningham and Seth Gordon of World Record Headquarters; and global brands like Nike. Programs in production or development include, among others, several episodes of BET’s web series #BLX; the multi-episode series Take it to the House for Bleacher Report; a range of first-person perspectives for The Players’ Tribune; and a wide variety of interviews and event-driven content for 120 Sports. Future plans include scripted and unscripted television series, animated and other youth-oriented content, short-form content and audio programming, as well as expansion beyond football to incorporate athletes from other sports into ACE Media’s content efforts.
NFLPA Executive Director DeMaurice Smith calls ACE Media a “transformative chapter” in the union’s ongoing evolution. NFL players agree:
“As professional athletes we have a huge opportunity to offer unbelievable levels of access and authenticity to the fans that support us,” says All-Pro Cornerback Richard Sherman of the Seattle Seahawks. “With the launch of ACE Media, we now have a way to seize that opportunity by creating content that no one else can, showing sides of ourselves that you won’t see anywhere else. We’re excited about the content we plan to help create, and we’re excited by the future of this company.”
All-Pro Linebacker Von Miller of the Denver Broncos says, “We’re all about being perfectionists on the field, but there is so much more to each of us when we are off of it. We’re multidimensional, with interesting ideas, pursuits and backgrounds. ACE Media will really be able to lift that curtain and bring some of those stories and ideas to life. Players have been asking for an outlet like this, and we’re excited to create some really cool content that will speak to multiple audiences in our personal voices.”
ACE Media will be led by CEO Scott Langerman, a 20-year veteran of the sports and entertainment industries who has held senior positions at Comcast SportsNet and Turner Broadcasting, among other media companies. Most recently, Langerman was an executive and advisor at SB Nation (now Vox Media), joining the company in its earliest stage and helping set the strategy for what would become one of the world’s fastest-growing and most successful new media companies. Langerman is currently assembling a dedicated team of executives to build ACE Media into a highly efficient content company that will maximize opportunities for players, programmers, publishers, brands and leagues to engage with audiences amidst a rapidly changing media landscape.
“ACE Media will be a totally different kind of media company with the unique ability to access professional athletes at scale to create a steady, year-round stream of compelling content opportunities. Moreover, given our unique relationship with athletes we’ll be able to feed an expanding appetite for content in a way that’s incredibly user-friendly, efficient and customizable,” says Langerman. “Regardless of where our partners sit within the content ecosystem, we’ll be able to deliver a player-driven solution for their business, whether it’s on the production, distribution or brand side of the industry.”
While the NFLPA has been a driving force behind the formation of the company, ACE Media’s vision is by no means limited solely to NFL players. “If this concept works for football players, we’re confident it will be a success for baseball, hockey, basketball and soccer players as well, along with any number of other professional athletes from every sport across the globe,” declares Nassar. “We look forward to building a company that will ultimately benefit all athletes by serving unique and compelling content across all sports and mediums.”