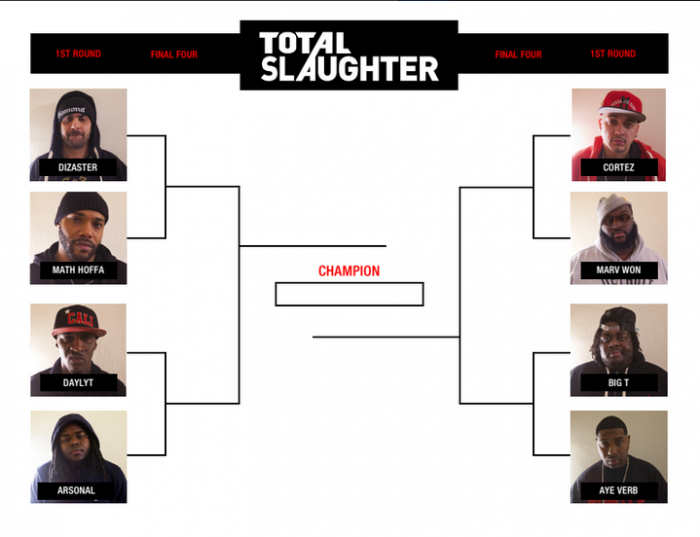 Road to Total Slaughter will feature eight of the top battle MCs in the country living together as they vie in a single-elimination tournament, for the chance to perform later this summer on the biggest stage in the history of battle rap. The new generation of stars will be mentored along the way by battle rap legends Loaded Lux and Murda Mook, with each of the four episodes culminating in a high-stakes, drama-filled battle judged by the Shady Records super-group Slaughterhouse. The eight battle rappers competing in Road to Total Slaughter are Arsonal (Newark, NJ), Aye Verb (St. Louis, MO), Big T (Chicago, IL), Cortez (Brooklyn, NY), Daylyt (Watts, CA), Dizaster (Los Angeles, CA), Marv Won (Detroit, MI) and Math Hoffa (Brooklyn, NY).

“This partnership with Fuse provides an invaluable platform to bring the culture and sport of battle rap to a wider audience,” says Montrel McKay, Executive Director of Development at Electus. “The team at Fuse believes in our and Shady Films’ vision for the potential of battle rap, and it’s exciting to have a partner who’s willing to take an unfiltered and authentic look into this world.”

Total Slaughter will be the debut live main event for the newly formed battle league of the same name, which was launched earlier this year by Eminem’s Shady Films and Slaughterhouse. The event will take place at Hammerstein Ballroom at Manhattan Center in New York City on Saturday, July 12. Tickets are available now through Ticketmaster.com. For more information and updates on Road to Total Slaughter or the Total Slaughter league and event, please visit www.WatchLOUD.com and www.ShadyRecords.com.