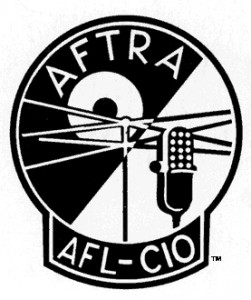 The American Federation of Television and Radio Artists (AFTRA, AFL-CIO) and Screen Actors Guild and have reached a tentative agreement with the Alliance of Motion Picture and Television Producers (AMPTP) on successor agreements to the Exhibit A of the AFTRA National Code of Fair Practice for Network Television Broadcasting (covering scripted network primetime and pay television programs), The CW Supplement and the Producers-Screen Actors Guild Codified Basic Agreement for feature motion pictures, scripted network primetime television and pay television programs.

Highlights of the new tentative agreement include:

The unions also agreed to modifications in the travel provisions of the contracts.

AFTRA National President Roberta Reardon said, “I am extremely pleased we met our goal of increasing contributions to our retirement and pension plans, and that we successfully completed this negotiation now to protect the needs of performers early in the process. I applaud AFTRA Chief Negotiator Kim Roberts Hedgpeth, and I thank Screen Actors Guild Co-Chair President Howard for his strong and supportive leadership. Our joint negotiating committee worked together seamlessly and in solidarity, and I am very proud of their work.”

Screen Actors Guild President Ken Howard, said, “Strengthening the Pension and Health Plans was our top priority in these negotiations ““ making such a significant gain in that area was a vital achievement. Increased wages across the contract and the expansion of the major role premium into pay television will not only put more money in performers’ pockets, but will provide yet another boost to our P&H funds. I’m grateful to have worked closely with AFTRA National President Roberta Reardon and want to give special thanks to SAG Chief Negotiator David White and his bargaining team. All the staff and members of this joint committee, from both unions, deserve praise for their focus and dedication. We had to make some difficult decisions, but working together, we’ve reached a deal that will protect our essential pension and health benefits for years to come.”

Details of the new agreement will be submitted for approval to the Joint National Board of AFTRA and Screen Actors Guild. Upon approval, the pact will be sent out for joint ratification by the unions’ memberships.

Representatives of the following organizations attended one or more of the negotiating sessions as observers: Alliance of Canadian Cinema, Television and Radio Artists (ACTRA), Writers Guild of America, West (WGAW), Directors Guild of America (DGA), International Brotherhood of Teamsters,(IBT), American Federation of Musicians (AFM) and the International Alliance of Theatrical Stage Employees (IATSE).

Formal negotiations between the 26-member Joint AFTRA-Screen Actors Guild Negotiating Committee and the AMPTP began on Monday, Sept. 27, in Los Angeles. Talks were preceded by months of joint wages and working conditions meetings held this past summer.