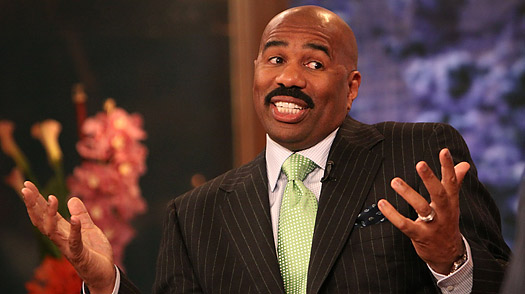 Steve Harvey is certainly not good friends with somebody close to his business or with access to his inner workings. This person (or persons) went to a UK press outlet, DailyMail.com, and held nothing back in revealing Harvey’s current published and previously unpublished challenges, including:

The outlet states that Harvey had to cancel his popular Neighborhood Awards, a show that supported and recognized local businesses from around the nation during a culminated awards show, which was a huge success. The concept owned by Harvey’s former business partner Rushion Mcdonald has been halted for an alleged “lack of promotion” according to the UK outlet. McDonald parted ways with Harvey almost a year ago which we posted in Radio Facts and it is well known in industry circles that McDonald was the brainchild in many of Harvey’s huge business successes including his syndicated radio show with Premiere Networks, Harvey’s wildly successful book Act Like a Lady, Think Like a Man and both movies that were made after the New York Times Bestseller. McDonald also spearheaded Harvey’s current TV show in 2012. We reached out to McDonald and he was not available to comment on the story. (We are not big fans of Premiere Networks and have published how we feel about them in Radio Facts ).Now Harvey is dealing with, yet, another faux pas after a videographer, Joseph Cooper, states Harvey told his audience to ‘go assault old white women’ and ‘spit on white people.’ as part of his routine during his reign as a comedian in the 90s. Harvey is being sued in court for 10 Million by the videographer who claims he has the right to sell the tapes. Harvey is attempting to halt the videographer from selling the tapes claiming he never granted the rights to the tapes and the former employee is allegedly pursuing the sale as a form of ‘extortion.’Harvey spent the last week vacationing with his family on a private island in the Caribbean and is allegedly culminating a new project called Sand & Soul Festival, which will debut in October in Nassau, Bahamas at Atlantis Paradise Resort. Ironically, this is very close to Tom Joyner ‘s yearly similar Family Reunion event held in September of 2017 in Orlando, FL.PETITION TO REMOVE STEVE HARVEY MORNING SHOW