The influx of TV Streaming sites and movie streaming services have had a massive impact on how studios and distributors do business in the entertainment industry.

Similarly, the streaming revolution has produced major changes in how consumers worldwide, especially Americans, engage with film and TV. A new study by crowd-sourcing company Piplsay, a market research analyst company, used a survey of 50,000 Americans to highlight some of these trends.

Their survey showed that 60% of respondents spend more time on streaming than pay-TV services, highlighting the increasing dominance of streaming content versus traditional subscription content. Piplsay reports that 38% of Gen Zers watch content exclusively on streaming services, the highest of any age groups. 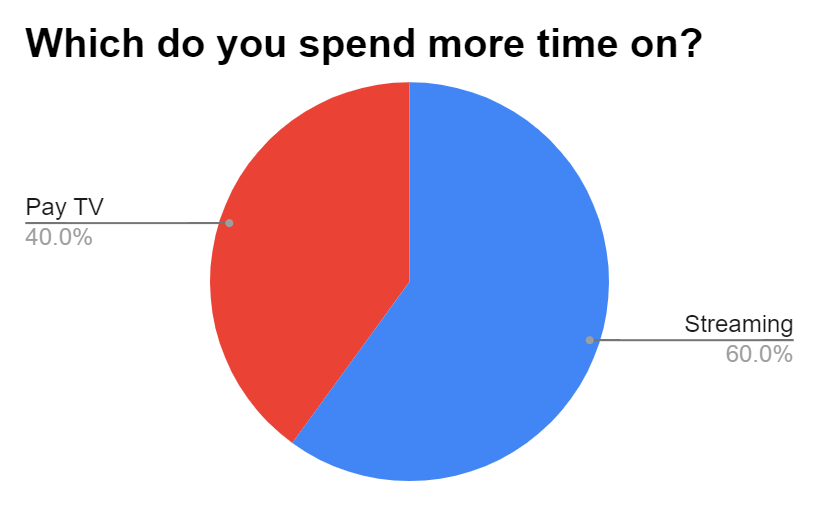 Three types of VOD (video-on-demand) content dominate the OTT landscape (over-the-top, referring to streaming services offered directly to consumers over the internet). SVOD refers to video-on-demand content made available through a service subscription (Netflix, Amazon Prime Video, Disney+, etc). AVOD refers to streaming content that is free to the consumer but advertising-supported, like Tubi TV Shows or movies on Tubi or Crackle TV Shows and movies 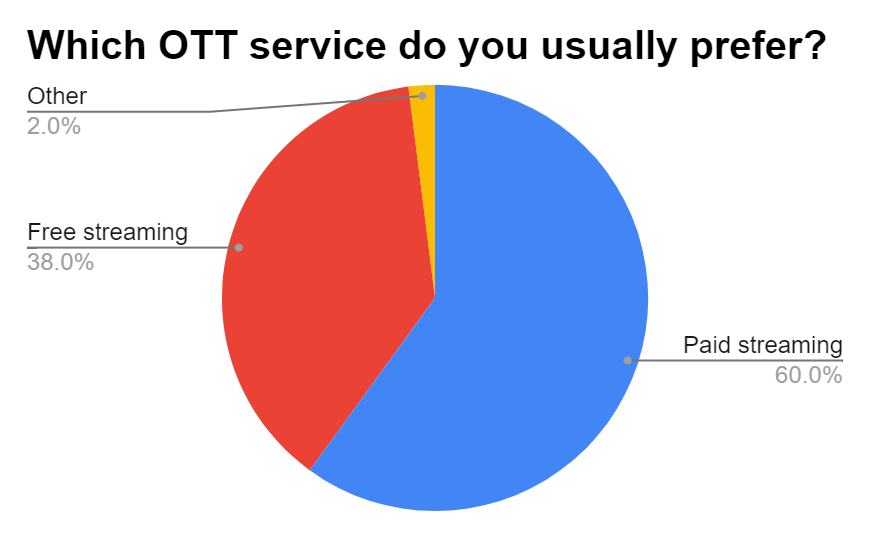 The vast majority surveyed predominantly consumer content on TVs (58%), with a distant second consuming content mostly on mobile devices (17%), followed by laptops (11%) and desktop computers (8%). A majority of Gen Zers watch content on mobile phones (58%), versus 45% of millennials. These findings are interesting not only for the relevant generational differences, but to highlight that mobility of viewing is not the draw that some might expect. 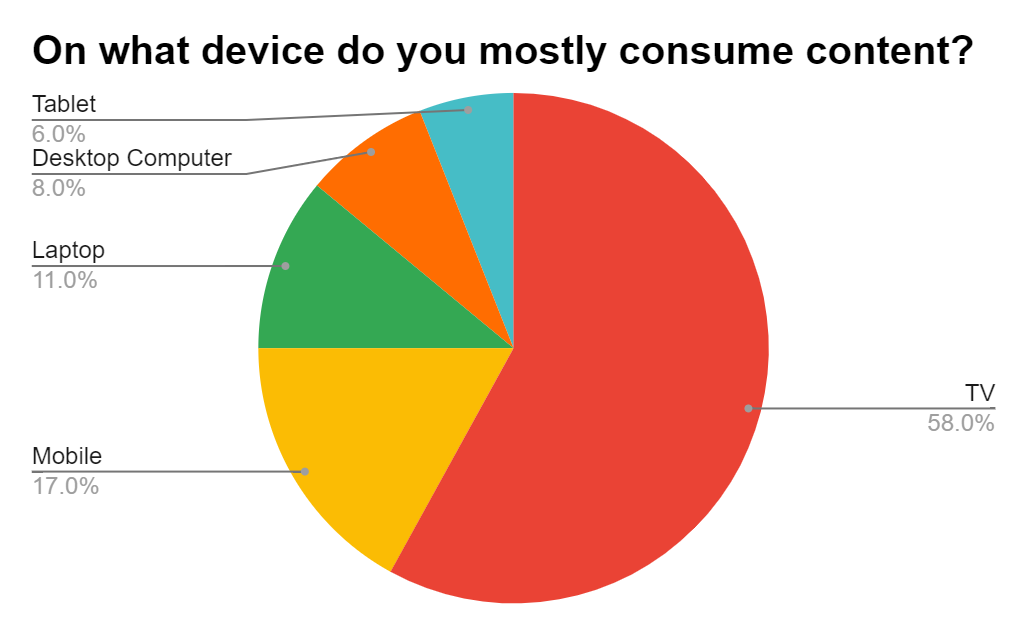 A whopping 66% of all respondents watch content on a static device (TV, desktop) versus 34% for all mobile devices combined (mobile, laptop, tablet).

The type of content typically viewed showed little variation between Pay TV and OTT, with movies dominating each at 22% of viewed content. TV shows came in a close 2nd for both Pay TV (19%) and OTT (19%), respectively. Rounding out the top 5 content preferences for Pay TV were news programs (13%), sports (12%), and cartoons (10%). 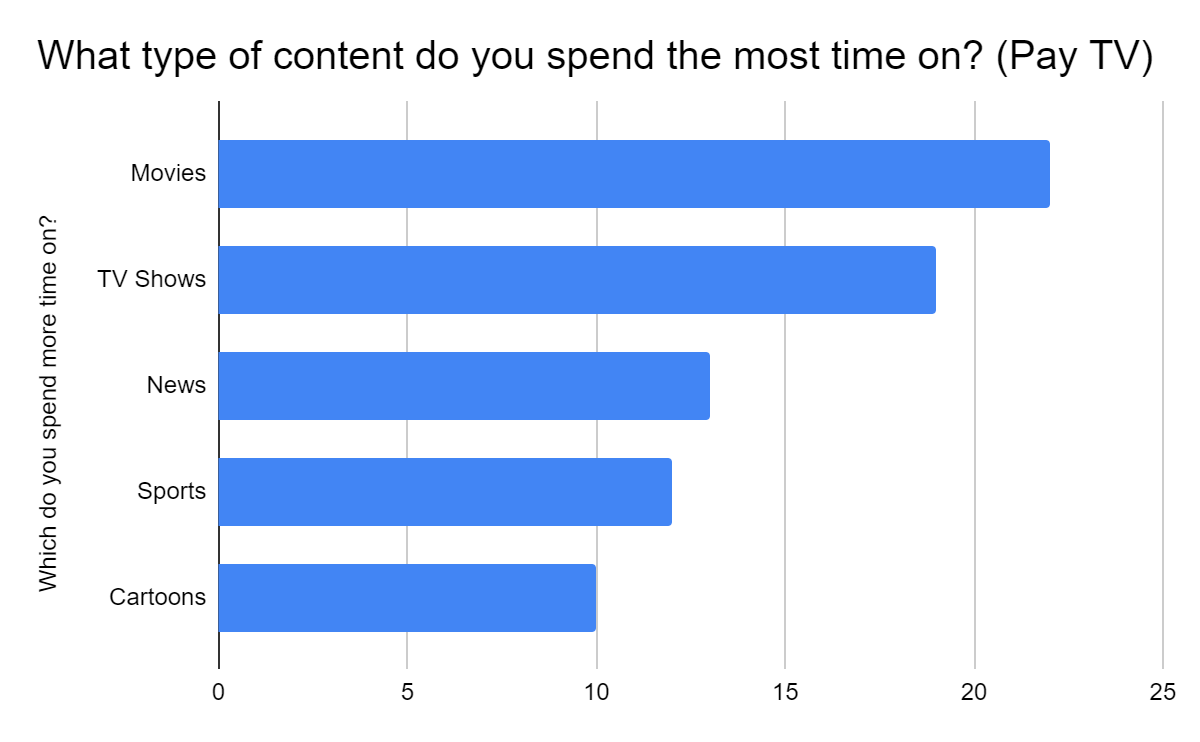 News (11%), sports (10%), and lifestyle (10%), by contrast, rounded out OTT’s top-watched programming. While movies and TV thus dominated both Pay TV and OTT viewing, it is noteworthy for content producers and distributors that cartoons skew towards Pay TV with lifestyle content having a uniquely high showing for OTT subscribers. 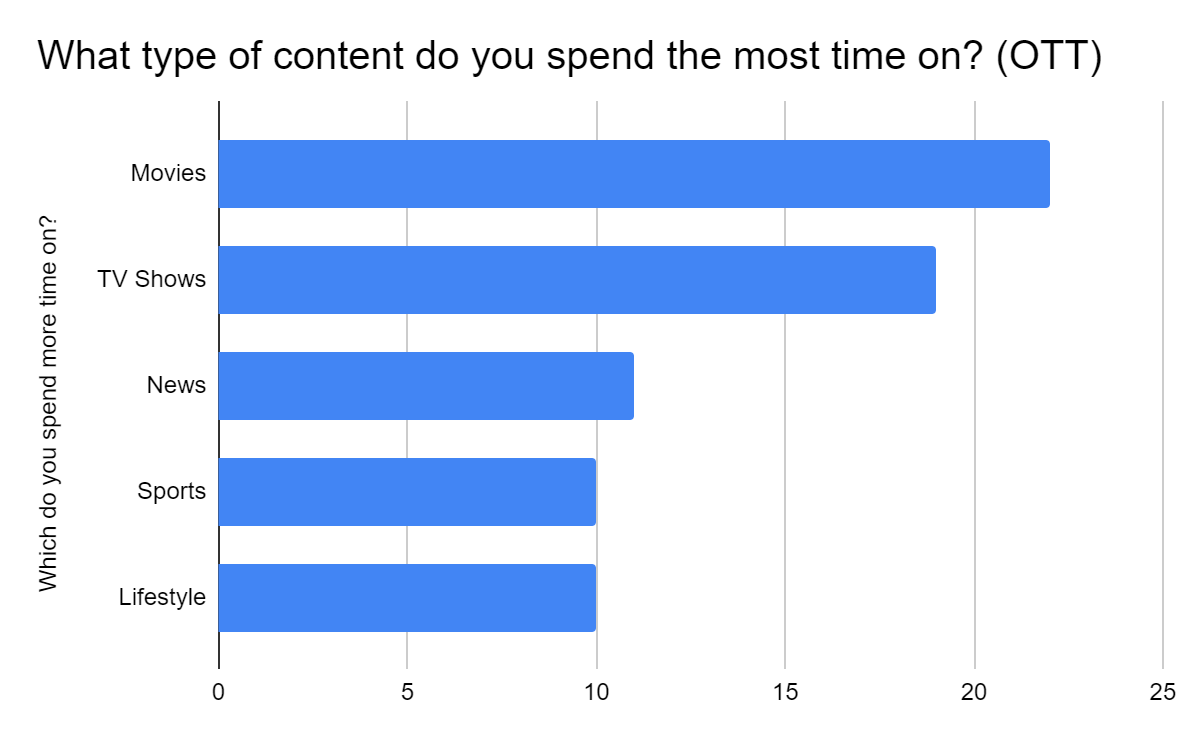 Differences in time spent watching content daily between Pay TV and streaming are where things really get interesting. For Pay TV subscribers, a considerable 34% of subscribers watch over 3 hours a day with 25% watching between 2-3 hours of content daily–a combined 59% of subscribers thus watch an average of over two hours of content per day.  17% of respondents don’t watch Pay TV daily, and a combined 24% of respondents watch less than two hours daily.

A substantial 28% of OTT subscribers, by contrast, don’t watch content daily. For those that do, 21% watch more than 3 hours daily, with a near tie for those who watch 2-3 hours (20%) and 1-2 hours (20%) daily. Rounding the findings out, only 11% watch less than an hour of content daily. These findings suggest both that OTT subscribers are more likely to intermittently view content and that, for daily OTT viewers, it’s a relatively even split between content viewing time over one hour daily.

These findings have considerable relevance for entertainment industry professionals that have concerns over the impact of the streaming revolution on the moviegoing public. Piplsay’s findings highlighted that a full third of respondents’ habits have remained the same (compared to three years prior), with 21% attending theaters more than three years ago. 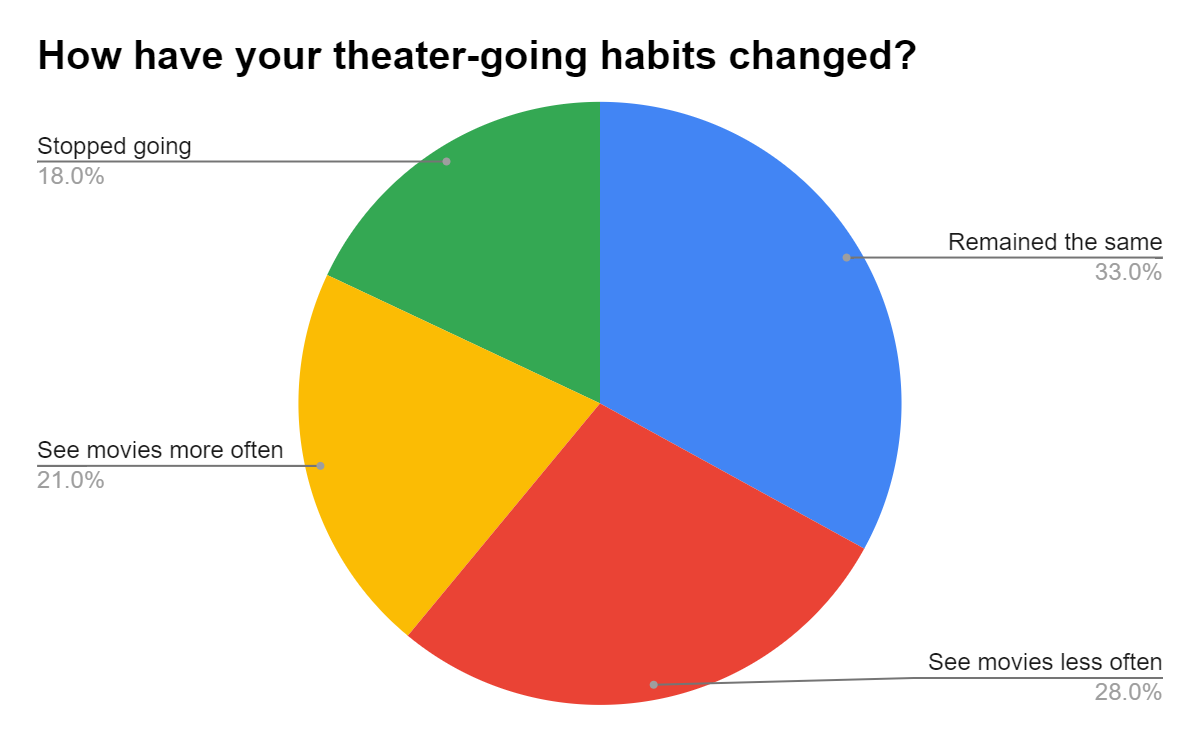 At the same time, a relevant 28% attend theaters less than three years’ prior, and 18% have stopped going to movies in the theater altogether. The study thus highlights that while 54% of respondents’ movie-going habits have not been heavily impacted by the rise of streaming, 46% have reduced their movie-going habits–most worrisome, of course, is the nearly one-fifth of respondents who have stopped going to the theater entirely.

For those who don’t go to the theater often, 44% cite the time and expense of seeing movies in theaters as the major reason for forgoing the theatrical experience. 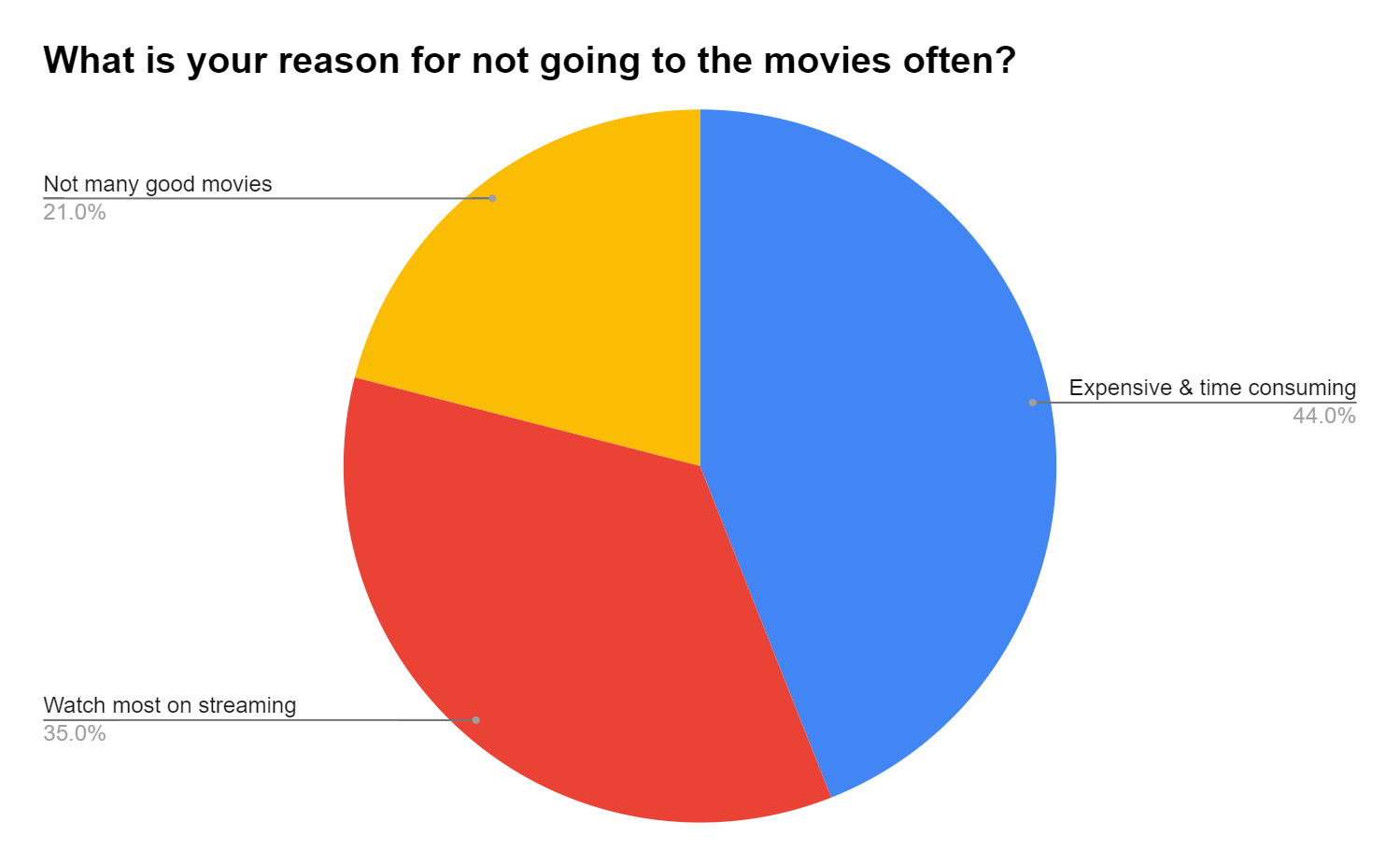 35% highlight that they’ve predominantly moved towards the streaming space for their viewing experience, with 21% citing a lack of sufficiently quality films as the reasons for their diminished attendance. This suggests a relevant but limited impact of the streaming revolution on the decision to avoid seeing films in theaters, at about 16% of respondents (35% of the 46% that attend theaters less).

For worried industry professionals, time and expenses being largely cited as the reasons for diminished theatrical attendance can be considered somewhat hopeful if the industry can find a way to reduce ticket costs and time incurred. Piplsay does highlight a gender disparity in respondents who attend theaters less than before, with 47% of women citing price as a factor compared to 38% of men.

Finally, for attendees who see films often, the ‘big-screen’ experience proves a major draw for continued theater attendance. One-third of moviegoers polled highlight the importance of the big screen experience as their reason for attending, and 26% cite that both the big-screen experience and fun/social factors form the basis of their reasons for attending the theater–the big-screen theater experience is thus relevant for a whopping 59% of the moviegoing public polled. The highest single factor contributing towards frequent theater attendance, however, is for fun/social experience, at 41%. 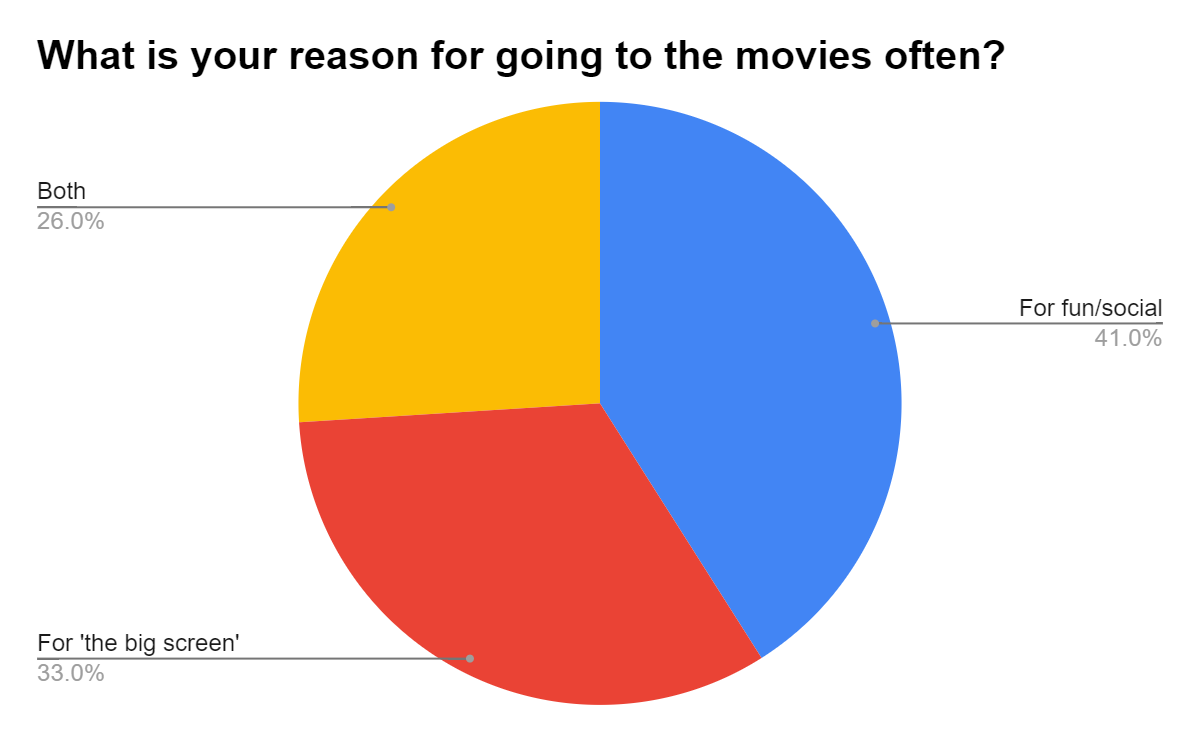 Altogether these trends speak to a huge impact of streaming services on the entertainment landscape. Pay TV is still a sizeable chunk of the market at 40%, but the considerable dominance of OTT streaming services highlights the challenges faced by Pay TV to retain subscribers in the new landscape.

The intermittency of streaming-dominant consumers will prove a challenge to ad-supported, ‘free’ VOD services over their SVOD siblings. Paid subscription services care that their monthly subscribers grow, not whether or not paid subscribers watch content daily. By contrast, ad-supported streaming services need as much active views as they can get (much like ad-supported television). As a consequence, the challenge for AVOD services is threefold: like SVOD services, (1) they want to increase the relative share of OTT consumers vs. Pay TV, but they also (2) would benefit from an increase in their relative share vs. paid streaming services, while (3) also finding ways to increase viewer commitment as a means to grow ad-revenue.

The challenge for theatrical distribution that the streaming revolution poses is also considerable. The ‘big screen’ experience is still a draw, but consumers’ feeling that the money or time spent going to the theater is increasingly burdensome is a strong counter-pressure (along with many feeling that the quality of movies isn’t enough of a draw to mobilize them to the theater).

The ease and low-commitment of home viewing in the new streaming world supports a flexibility with movie viewership which makes experimenting with more novel films an easier draw for audiences. At the same time, theaters need to highlight ways to make movie-going more desirable with and accessible to audiences, while production companies aiming for theatrical distribution need to pay careful attention to the quality of their films to survive against the growing streaming landscape.

This all will continue to get more complicated as new major streaming players like Warner Bros.’ HBO Max and NBCUniversal’s Peacock take the field this year. Can Pay TV and theater chains find ways to draw audience eyes and pocketbooks away from increasingly tense streaming alternatives? That’s the big question. As the Piplsay study highlights, the streaming revolution hasn’t yet produced a resounding ‘no’ on that score, but it is safe to say the biggest challenges are far from over.

Hassahn - January 22, 2021 0
The third annual iHeartRadio Podcast Awards brought together the most influential names in podcasting to honor the most entertaining and innovative podcasts of 2020, celebrating the incredible talent and wide variety of leaders across the booming podcasting industry. [...]

Joe Exotic Says He Was ‘Too GAY’ For Pardon From Trump