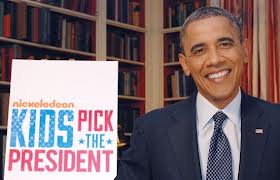 The kids of the United States have spoken and President Barack Obama has been elected the winner of Nickelodeon’s 2012 Kids Pick the President “Kids’ Vote.” Since it began in 1988, kids have correctly picked the winner (in advance of the national election) five out of the last six times. More than half a million votes were cast in the network’s online poll as part of Nickelodeon’s Kids Pick the President initiative to build young citizens’ awareness of, and involvement in, the election process.President Obama received 65% of the vote and former Governor Mitt Romney received 35%. In order to more closely replicate the actual election, and to ensure the results were more authentic, this year the voting was limited to one vote per electronic device. Kids were able to cast their votes online from Oct. 15 to Oct. 22.