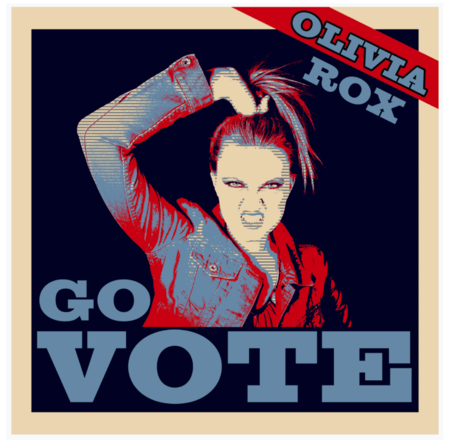 Singer/songwriter/pop star Olivia Rox has released the music video to her original song, “GO VOTE,” which she recently wrote to spread the word to her young fans to vote. Being a first-time voter, Olivia wants to reach her generation and help inspire them to stand up and make voices heard.

The inspiration for “GO VOTE” came about after talking to her friends, asking them if they’re going to vote, and hearing that many didn’t plan to because they didn’t feel their vote would make a difference. She turned to her musical prowess and creativity and decided to take action by writing this powerful song.

“I feel the need to get out the message to go vote to my generation by any means possible, and I feel the best way to do that is through music. Music can reach those people who otherwise wouldn’t listen. Music is very powerful.” Olivia explains that “we need to be grateful for the opportunity to live in a society where our vote matters. Many countries around the world aren’t that lucky, and don’t get to choose who will lead them. I feel that we should not waste that right that has been given to us, that’s why I am urging my generation to get out, go vote, and have their voices heard.”

Olivia goes on to say, “My generation doesn’t want to listen to PSA’s and they don’t want to hear from major news sources. Most of my generation gets their news, and form their opinions on Instagram, Snapchat, YouTube, Facebook, and TikTok – primarily from their peers posting social content. Sometimes in the form of memes and viral videos. That’s why music and especially music videos are really one of the only things that can break through to reach the youth. So, I felt the best way to reach young people was to create something that could be shared with my peers on social media. I want to use my platform to do good.”

Before the pandemic, Rox was getting ready to tour and perform in the U.S. & Europe. When the tour was cancelled, she refused to stop creating. Inspiration hit and Olivia wrote “GO VOTE” in just two hours.

With social distancing and safety measures in mind, Olivia & her Mom, esteemed director & music producer, Tamara Van Cleef, took it upon themselves to produce and record the song, film, and edit the music video from start to finish. Because of social distancing, creating this music video was very different from past ones. Normally, they have a crew from 15 to 50 people including cast, cameramen, lighting, sound, DP, Director, make-up, hair, wardrobe, craft services, choreographer, editors, producers, behind-the-scenes assistants, etc. On this video, there were only two people, who wore all of the hats to create this labor of love, for an important cause.

Olivia Rox is a 21-year-old All-American pop dream. Her self-written and composed debut album, POPROX, features chart-topping pop singles, “It Girl”, “Galileo” and “Shooting Star” The album showcases the vocal powerhouse, as she flirts with undertones of rock, soulful jazz, and a whistle tone with her 4+ octave range, as well as showcasing her talents on guitar and piano.