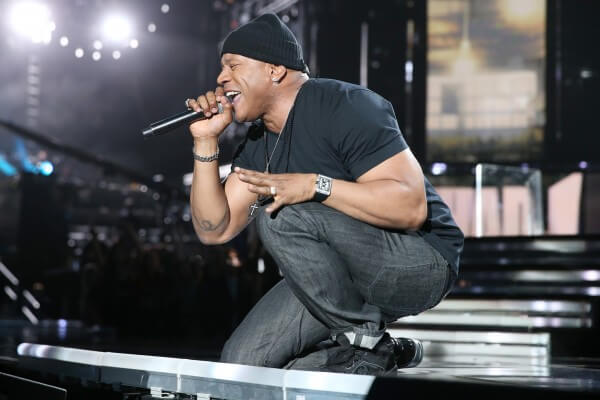 TWO-TIME GRAMMY® WINNER LL COOL J RETURNS TO HOSTTHE 57TH ANNUAL GRAMMY AWARDS®Watch What Happens On Music’s Biggest Night®,Live On CBS, Feb. 8, 2015Entertainment icon and two-time GRAMMY® winner LL COOL J is set to return as host of the 57th Annual GRAMMY Awards® marking his fourth consecutive year as MC. Over the years, the dynamic host has presided over 10 GRAMMY shows, tributes, and specials, and served as a producer for “The GRAMMY Nominations Concert Live!! — Countdown To Music’s Biggest Night®,” and “A Very GRAMMY Christmas,” holiday special.”As both a GRAMMY-winning recording artist and an accomplished actor, LL COOL J’s wide range of talent, dynamic personality, and charismatic energy make him the perfect choice to host the GRAMMY Awards,” said Recording Academy President/CEO Neil Portnow. “His unique expertise allows him to set the right tone for the show and connect with everyone — from his musical peers to fans at home. We are honored to have him back.””I’m thrilled to again be part of Music’s Biggest Night,” said LL COOL J. “The performances and moments you see on the GRAMMY stage are nothing less than amazing throughout the years and this year’s show is shaping up to be one you will never forget.”The lineup for the 57th Annual GRAMMY Awards currently includes previously announced performers AC/DC, Eric Church, Common, Ariana Grande, Miranda Lambert, John Legend, Madonna, Ed Sheeran, Sam Smith, Usher, and Pharrell Williams. The eclectic lineup sets the stage for what’s sure to be an incredible night for music. Additional performers and presenters will be announced shortly. Taking place at STAPLES Center in Los Angeles, Music’s Biggest Night will be broadcast live in high-definition TV and 5.1 surround sound on the CBS Television Network, Sunday, Feb. 8, 2015, from 8 – 11:30 p.m. (ET/PT).The 57th Annual GRAMMY Awards are produced by AEG Ehrlich Ventures for The Recording Academy. Ken Ehrlich is executive producer, Louis J. Horvitz is director, and David Wild and Ken Ehrlich are the writers.About The Recording Academy®Established in 1957, The Recording Academy is an organization of musicians, songwriters, producers, engineers and recording professionals that is dedicated to improving the cultural condition and quality of life for music and its makers. Internationally known for the GRAMMY Awards — the preeminent peer-recognized award for musical excellence and the most credible brand in music — The Recording Academy is responsible for groundbreaking professional development, cultural enrichment, advocacy, education and human services programs. The Academy continues to focus on its mission of recognizing musical excellence, advocating for the well-being of music makers and ensuring music remains an indelible part of our culture. For more information about The Academy, please visit www.grammy.com. For breaking news and exclusive content, follow @TheGRAMMYs on Twitter, like “The GRAMMYs” on Facebook, and join The GRAMMYs’ social communities on Google+, Instagram, Tumblr and YouTube.About LL COOL J:LL COOL J is an entertainment icon who has found great success crossing into multiple mediums. A two-time GRAMMY winner, recording artist, talented actor, author, NAACP Image Award winner, entrepreneur and philanthropist, LL continues to display his wide range of talents with every project. First introduced to the world in 1984 as a Def Jam Records flagship artist, LL is the first rap artist to amass 10 consecutive platinum-plus selling albums. The multi-platinum artist and two-time Rock and Roll Hall of Fame nominee is currently tied for third place for most Billboard chart debuts by a rapper. As an actor, LL COOL J has successfully transitioned to one of the consistently highest rated shows on television. He currently stars in the CBS hit primetime drama series, “NCIS: LOS ANGELES,” and his performance on the show garnered him a NAACP Image Award four years in a row for his role as Special Agent Sam Hanna. Continuing his musical expedition three decades after he first released music, LL most recently released his critically acclaimed album Authentic, which scored him his 13th Top10 Album on the Billboard R&B/Hip-Hop Chart.

Radio FactsJanuary 8, 2013September 18, 2022
January 8, 2013September 18, 2022
FacebookTwitterInstagramYoutube
We use cookies on our website to give you the most relevant experience by remembering your preferences and repeat visits. By clicking “Accept”, you consent to the use of ALL the cookies.
Do not sell my personal information.
Cookie SettingsAccept
Manage consent