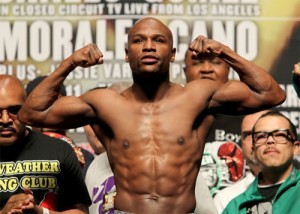 Undefeated eight-time world chion Floyd “Money” Mayweather, boxing’s pound-for-pound king and the highest paid athlete in the world (Forbes, 2012), has entered into a groundbreaking pay-per-view deal with Showtime Networks Inc. and its parent company, CBS Corporation. Under the new deal, SHOWTIME PPV ® will collaborate with CBS Corporation to comprehensively promote Mayweather’s events on the CBS Television Network and via the corporation’s expansive media platforms.The deal””a unique revenue-sharing arrangement between SHOWTIME PPV and Mayweather””will enable him to fight up to six times over a period of 30 months, with the first mega-event taking place on May 4, 2013, when Mayweather will fight Robert “The Ghost” Guerrero. More details of this upcoming event will be announced shortly.Mayweather’s new deal is by far the biggest in the sport of boxing (specific financial details are contractually confidential). Mayweather is the PPV king and averages over 1 million PPV buys per event, which is the highest PPV buy average of any boxer in history. At this record-setting PPV performance level, if all six fights contemplated by this deal occur, it will be the richest individual athlete deal in all of sports.