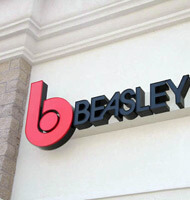 CBS Radio released 7 Radio Stations to Beasley Broadcast Group December 1 and the result are layoffs that began this past Friday. Of course those laid-off were disappointed that they were terminated a week before Christmas.  Thus far, none of the layoffs appear to affect the full time talent at 3 of the cities best ranked: WPEG-FM (“Power 98” 97.9); WBAV-FM (“V” 101.9) and WSOC-FM (103.7). Thus far about 200 employees have been let go.