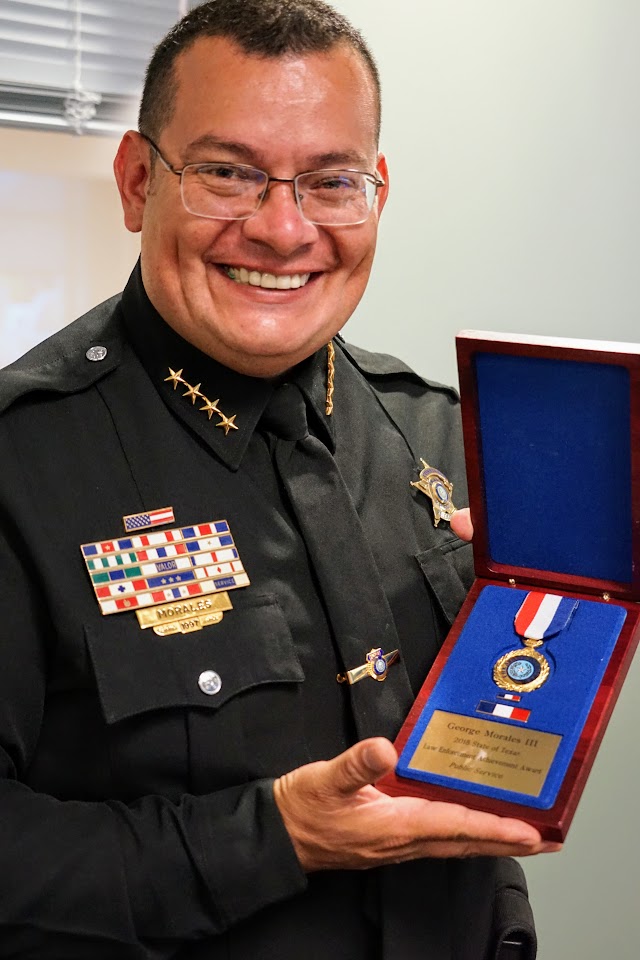 With grit and determination, a familiar trait of Huston-Tillotson’s students, Morales finished the requirements to graduate in October 2018. Typically, students finish December or in May of a given semester, but Morales got it done two months earlier.

“I am pretty humbled where I’m at,” Morales said on where he goes from here.

When asked about what made him return to college, he said, “I think raising my family, providing for my community, motivated me to return to school.  When you are out there, speaking in the public, telling young kids to finish school, you have to be an example.  Now, I will let them know the sense of pride I had, especially going in my latter days to finish school.  I was excited about it, the whole time through.”

When then-Travis County Chief Deputy Morales decided to return to college in 2014, 22 years after first giving college a shot, he walked into class with the typical first-day jitters and a spiral notebook and pencil; he thought those were the only supplies needed.  Yes, really.  Instead, he needed a laptop and other tech essentials, a stunning revelation for him.

“It was not like when I went to college 20 years ago,” Morales said, chuckling. “You got to have a lot of technology now.  I thought college was college.”

Soon after, Morales’ wife surprised him with a 10-inch Samsung tablet outfitted with a keyboard and leather carrying case.

Indeed, he was ready with a new attitude on a new mission.

Although Morales quit college the first time, this time, it was different.

“I was determined. I was excited.  I was ready.”

Morales fittingly declared criminal justice as his major.  He wrapped up his associate’s degree in 2016 with a 4.00 and continued to his bachelor’s.  All the while, he was running for and got elected as constable.

During his matriculation as an upperclassman, he recalled a very inspiring speech on procrastination by one of his instructors, Dr. Courtney Robinson.

Morales, with renewed drive, knew that he was not a procrastinator.  But the message resonated with him, so much so, that he often reminded his peers about the pitfalls of procrastination.

“She had just the best spirit and drive, determined that you can complete your goals that are set before you, no matter where you came from.  I came from a working-class community of Dove Springs,” Morales proudly noted.

Then, there was another instructor, Terra Richardson-Brown, who Morales recalled being younger and working on her Ph.D.

“Just to see her drive and her understanding on how education is applied and how we use it in everyday lives was amazing.  I knew right then that I would try to finish with high honors.”

And he did, finishing his bachelor’s degree with a 3.98 GPA because of a lone “B” in a statistics class.

A resolute Morales said, “I was okay with that because it was a ‘high’ B.”

The three female professors plus two male professors, Robert Russell and Terryl Pickens, were instrumental in Morales’ success.  Morales recalls a conversation with Russell and Pickens about why “Lady Justice” is blindfolded.

With all five of his professors, Morales knew that his passion was community policing.  Morales carries around his business cards on which his favorite job-related quote appears, “Community policing is knowing and respecting the community we serve.”

When Morales began policing as a patrolman, he thought he would lose a lot of friends.  He indeed lost some, but he gained a lot more.

“And the ones that decided not to be my friend were more inspiring and motivating for me to finish,” Morales said.

“I’m one of those guys who see the goal, and I go after it.  Everybody knows that there is a light at the end of tunnel, but to me, you set a goal and go after it. Life is about completing goals.”

Sure enough, Morales has completed a huge goal, finishing college.  He thanks his advisors, Shakitha Stinson and George Marmell, for keeping him on track with his courses to graduate.

There is a special ring to “graduating” for Morales.  He paused, reflecting.

“If you grew up poor like I did, in a family of nine, whose grandparents came from Mexico, whose father worked two jobs, whose mother was a custodian, who had a child at age 16 (now 28 years old, the oldest of four, and Morales is still married to his children’s mother after 28 years with five grandchildren), why not get a bachelor’s degree.  Why not complete it.”

Despite the odds, education was key for Morales.  After high school, he went to the police academy and was later awarded “Officer of the Year” several times.

Last summer, Morales received the State of Texas Commission on Law Enforcement “Achievement Award for Public Service,” which was very rare for a constable to receive.  He was amazed and went on to receive the “Cesar Chavez Award” for East Austin.

Morales’ staff nominated him for the public service awards because they saw how passionate he was to serve the community in which he was raised.

“I showed them a different style of policing where you have people in the community that say, ‘This guy looks like me, talks like me, he grew up like me, acts like me, he must be me.’ That was the focus I had.  One of my staff members said, ‘These people really relate to you.’”

For Morales, building relationships with his community is key.

“It’s not rolling down the window and waving; it’s about getting out of the car and having decent conversation with decent people, understanding their background.  I wrote an article where I shared that moving forward is not buying a brand-new pair of shoes, but it is making sure we have shoes so that we can walk forward.”

Well, come Commencement Day in May at Huston-Tillotson University, hundreds will see Morales walk forward as his name is called to receive his degree, and the next part will be an emotional one.

“I will walk over and hand my mother a bachelor’s degree from her son who, out of nine children (second to the youngest), is the first to finish college.”