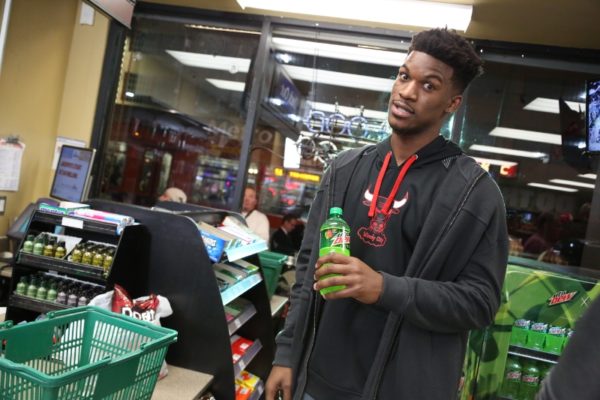 In 2015, PepsiCo and the NBA announced a multi-year marketing partnership to unite the passionate fans of the NBA with the power of PepsiCo's food and beverage brands, including Mountain Dew, Aquafina, Brisk and Ruffles. Mountain Dew serves as the lead brand in North America for the partnership, joining longtime PepsiCo brand Gatorade, which has been an NBA partner since 1984.

“The Mountain Dew brand is all about finding and delivering awesome, one-of-a-kind experiences to DEW Nation,” said Greg Lyons, senior vice president of marketing, Mountain Dew. “The NBA partnership has been a natural fit for us, and we're pumped to help deliver an immersive All-Star experience to hoops fans – one that symbolizes how the game starts on the court, but lives everywhere.”

Mountain Dew plans to unleash a number of interactive and energizing events in and outside of Toronto during NBA All-Star 2016, including:

Court Vision: An Interactive Virtual Reality Art Experience
Hosted by Mountain Dew at Artscape Sandbox in downtown Toronto, convenient to both the Air Canada Centre and Ricoh Coliseum, this highly interactive fan event will feature Tilt Brush, Google's virtual reality application which lets you paint in three-dimensional space with endless possibilities. In collaboration with PepsiCo Creator, the company's marketing innovation team that co-creates never-before-seen, culturally-relevant programs for consumers, the event will showcase emerging artists from Toronto and the U.S. who will create basketball-inspired 3D artwork with Tilt Brush.

Fans on-site will also be able to demo Tilt Brush and create artwork while sampling DEW products and enjoying the sounds of live DJs, as well as experience live appearances from Mountain Dew athletes and NBA All-Stars throughout the weekend. Visit www.mountaindew.com/nba for event details. Fans beyond Toronto can follow the excitement via the Mountain Dew social channels to get all-access coverage throughout the weekend using #DEWxNBA.

“Make An Introduction” TV Commercial Launch
Mountain Dew is excited to debut a new TV commercial titled “Make An Introduction” featuring NBA All-Stars Russell Westbrook and Jimmy Butler, as well as rising star Julius Randle. The commercial will demonstrate how the game starts on the court, but the lifestyle around the game lives everywhere. It will air for the first time in the U.S. and Canada during NBA All-Star, extending the reach of the Mountain Dew All-Star experience outside of Toronto. Fans can view the digital version here to check out the very first DEWxNBA TV commercial.

Painting Union Station Green
Mountain Dew is going to make an NBA All-Star Weekend splash throughout several high traffic areas around Union Station in Toronto with a major out-of-home advertising installation. From wall murals and door decals to floor and column wraps, the artwork showcases how DEW athletes charge the game both on and off the court, and celebrates the vibrant personalities and unique styles of the NBA's biggest stars.

NBA All-Star Celebrity Game Presented by Mountain Dew
Mountain Dew is the presenting sponsor of this year's NBA All-Star Celebrity Game on Friday, Feb. 12, at 7 p.m. ET, on ESPN in the U.S. and TSN and SportsNet 1 in Canada, which will feature some of the hottest celebrities from film, TV and music, along with top NBA & WNBA Legends taking their skills to Ricoh Coliseum for a fun and entertaining basketball game. The game will pit Canada vs. the U.S., with DEW athlete and 2016 NBA All-Star Isaiah Thomas as an assistant coach on the U.S. team.

THE CITY OF CHICAGO AND IHEARTMEDIA CHICAGO’S 107.5 WGCI PARTNER FOR MEMORIAL DAY STAY AT HOME WEEKEND

iHeartMedia Jackson Announces the Debut of The New Real 105.1