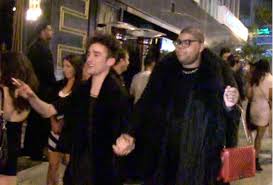 In this age where coming out seems to be a popular trend or at least the right thing to do, we have seen Frank Ocean, Clive Davis, and a few others step out from behind the fear of being a gay man. While having a conversation with a friend from Holland, he couldn’t believe that this was even an issue in the United States, the land of the “free.” He couldn’t believe that this was even newsworthy but that is the country we live in. Tuesday, Earvin “E.J.” Johnson III is sort of came out the closet thanks to TMZ. They were able to catch up with EJ for a quick interview that featured him walking on the Sunset Strip wearing a fur coat, carrying a handbag and holding the hand of an unidentified man. TMZ is making the claim that the gentleman’s hand he was holding is in fact EJ’s boyfriend.During the interview the photographer asked EJ, about the new Dodgers season and the Lakers’ playoff chances, then let him go on his way and reported that the young man accompanying Johnson is his boyfriend. That has not been confirmed at all but TMZ is sticking to their story. Magic Johnson did release a statement to TMZ. “Cookie and I love E.J. and support him in every way. We’re very proud of him.”