Welcome to the Salute Her Awards a different kind of celebration honoring incredible women who are making the world, not just Charlotte, a better place. 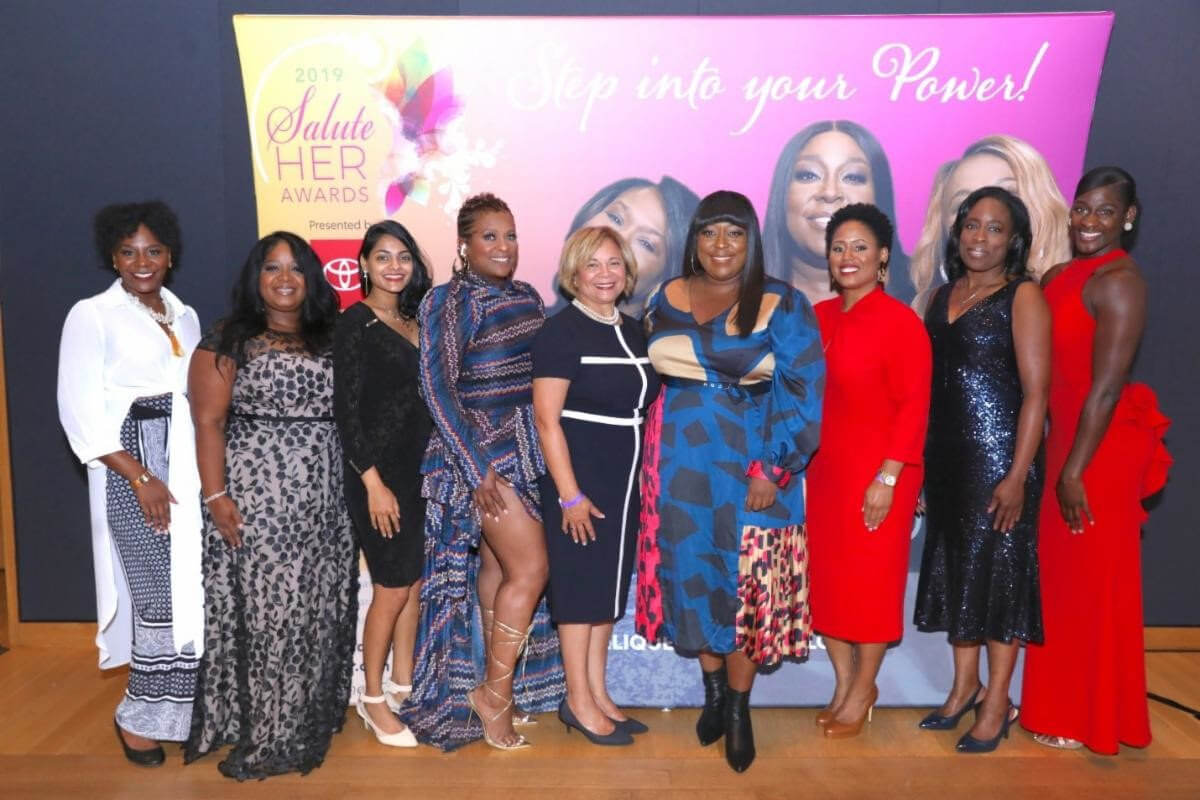 “Who's feeling good tonight? Beautiful Black women, beautiful women of color. This is a salute to You” comedienne and Emmy Winning co-host of The Real Loni Love welcomed the crowd as Maxwell's “you're the highest of the high” from “Ascension” soared through the Mint Museum Uptown's auditorium. Love then instructed the DJ to drop “Before I Let Go” from Maze featuring Frankie Beverly. “Here we go now. Clap your hands” as she two-stepped with Charlotte's finest!

The Sisters from AARP team were also a strong presence. The Salute Her Awards Presented by Toyota social media wall was popular as folks documented their presence. Grooves came courtesy of WBAV 101.9, which airs Café Mocha Radio Sunday nights from 7-9pm.

Salute Her Awards Tour presenting sponsor Toyota American Pride honoree Captain Lindsey Jefferies, the first Black woman to fly the storied Blackhawk for the North Carolina Army National Guard, dispelled the stereotype of ‘pilots' in a stunning, red evening gown that would light up the skies. During her acceptance speech, Captain Jefferies spoke of showing young women like herself that they can fly too.

Sisters from AARP presented the ‘Creating the Legacy Award that exemplified their mission to Melissa Harville-Lebron's for her undeniable commitment to her children. Not able to squash her sons' love of racing, the mother of seven (three biological and four from her siblings) buckled up and supported their ride by becoming the first Black women to solely own a NASCAR team. From Howard University alumna Juliette Wilson's efforts to help Charlotte women transition from homeless through her organization FACET (Faith in Action Community and Educational Transition) Services and her Legends Luncheon to American Airlines Community Engagement Specialist Amani Council, who literally facilitates over 130,000 employee “good deeds” engaging voluntarism for the leading airline, the evening was filled with love and compassion. All of the honorees were visibly moved by the video presentations and appreciation for their contributions. And, to seal the deal, The HamilTones, Anthony Hamilton's most famous background singers, serenaded the crowd.

Driving home the event's “Step Into Your Power” theme from government to civic responsibility, the event honored Charlotte City Council Member Dimple Tansen Ajmera, the city's first Indian American member and youngest woman elected; Bree Newsome Bass who famously scaled a flagpole to remove the Confederate flag from the South Carolina capitol; and the lady of the city herself, Mayor Vi Lyles, the first Black woman to serve in that role.

During her acceptance speech, Newsome Bass admitted to the crowd that she was scared in her famous moment. “Courage is not about the absence of fear,” she said. “Courage is about having something that you believe in that is greater than that fear and having the determination to fight for it.”

Mayor Lyles made the crowd laugh, opening with “I'm not a millennial though my hair says I am.” As she closed out the evening awards, the mother and grandmother referenced the famous Maya Angelou quote about people remembering how you make them feel: “We want you to feel welcomed, honored and respected. That's what this world is all about.”

And that's exactly what the Salute Her Awards delivered. For one magical night, these women who give so much of themselves every single day were showered with the honor and respect they so richly deserve.

The Salute Her Awards produced by the nationally syndicated Café Mocha radio show is presented by Toyota, Sisters from AARP, LusterPink and American Airlines

For more information on the 2019 Salute Her Awards Charlotte, go to www.cafemocharadio.com or www.saluteher.com.