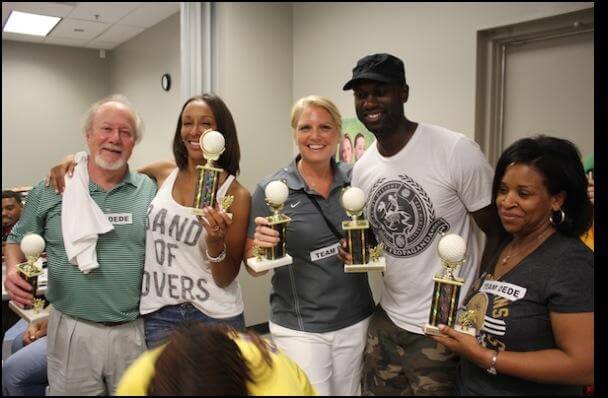 On the 24th of July at Alley Cats in Arlington, TX, K104FM and DeDe McGuire, host of “DeDe in the Morning” held their 1ST Annual “DeDe’s Putt Putt Golf Tournament”. They raised $6,000 to benefit “Women Called Moses” a nonprofit organization to help battered women and their children. Women Called Moses Founder, Debra Nixon-Bowles was truly excited about the support she has received from DeDe McGuire, K104FM and all of the companies and individuals who donated funds to this cause. Debra told the crowd, “Without your support, the doors to Women Called Moses would have closed.” DeDe McGuire publicly thanked Eberstein & Witherite of 1800 Car Wreck who donated and played, in addition to D.A Craig Watkins and Assistant D.A Heath Harris. She also thanked sports legend Deion Sanders and all the K104FM listeners who donated as well.DeDe McGuire and K104FM are using their platform to help educate the community about the cause of domestic violence and bring awareness to what Women Called Moses is doing for victims. Did you know? According to the Department of Justice, 1 in 4 women will experience domestic violence. To better comprehend this statistic and undiscriminating problem, and to learn how to help prevent it. Women Called Moses was created to be an underground railroad for victims of domestic violence. This non profit organization runs off of donations to help prevent and end the cycle of violence against women. Women Called Moses accomplishes this through education and advocacy services provided to individuals, families, and community agencies throughout the United States of America. Women Called Moses addresses the despair of hopelessness and fear that victims experience of all ages and backgrounds face who are in crisis situations. It is through this agency that victims find their voice that will help them to determine their future. If anyone wants to make a donation, please visit them online at: www.womencalledmoses.org.

The Rise of The LGBTQ Rainbow in Black Music

Digital and Radio FactsMarch 21, 2021August 7, 2022
March 21, 2021August 7, 2022
FacebookTwitterInstagramYoutube
We use cookies on our website to give you the most relevant experience by remembering your preferences and repeat visits. By clicking “Accept”, you consent to the use of ALL the cookies.
Do not sell my personal information.
Cookie SettingsAccept
Manage consent