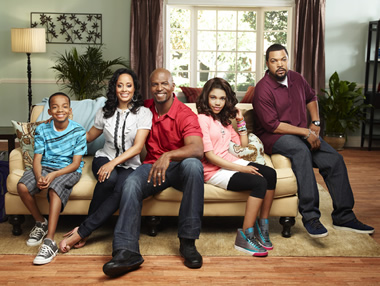 TV’s Much Loved Family Man Terry Crews Flexes his Fatherly Muscles as he Tries to Maintain Balance in the Midst of Changes, in the Second Season of THE FAMILY CREWS

Terry Crews, America’s favorite TV dad is back for another season of THE FAMILY CREWS, granting viewers an honest, glance of what it is like to have a successful career in Hollywood, while keeping your faith intact and yourfamily fulfilled. The second season of THE FAMILY CREWS premieres Sunday, March 6 at 8:00 p.m.* Terry Crews, dad both on and off screen, is not your average movie star. Married to his loving wife Rebecca for more than 20 years and the devoted father of five, ages 5 to 23, he has been able to navigate the chaos of raising a family in the entertainment world, without compromising his mid-western values…until now. Now, everything and everyone is changing at the same time, including Terry himself.  He now has to uproot his family again, and move them cross country in order to work on a new project. Just having returned home for his last movie shoot, he has the daunting task of telling his family the news. His wife Rebecca is upset that she has to put her career aspirations on hold, yet again. Tera, now 12, opposes the move with fears of not making new friends and sadness over leaving her newly redecorated bedroom behind. Azzie, on the other hand, is indifferent as she awaits news of an audition for the NYU Musical Theater Program that will decide her fate. New mom, Naomi, and her boyfriend, Jorge, will stay in L.A. with their 5 month-old baby, Miley. The little ones, Isaiah and Wynnie, are both excited about the move and thrilled that they can be with their dad, butWynnie starts to act out as the move draws near.More new beginnings ahead, this season is filled with twists and turns as navigating life in a new place awaits the entire family.   Fans of THE FAMILY CREWS will tune in once again as the Crews family grows, loves, laughs, and prays their way through another chapter of their journey.
Tweet
Share
Share
Pin
0 Shares