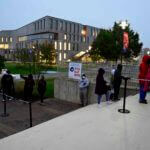 Campus Community Encouraged to Participate in Civic Engagement and Assist Others

BALTIMORE — Morgan State University President David Wilson announced that all classes scheduled for Nov. 3, 2020, will be cancelled to allow the opportunity for all students and faculty to participate in Election Day voting. Classes will resume as scheduled the following day on Nov. 4.

“This is a very important election with a number of key outcomes at stake and it is imperative that everyone who can vote, have an opportunity to vote and this includes our students and faculty here at Morgan,” said President Wilson. “Our Morgan Community has been engaged in what the results of this election may mean for our future, particularly our students, and we wanted to clear a path for them to have their say with their vote.”

For those who have already exercised their right to vote, the University encourages them to find other ways to participate in civic engagement on Election Day. Volunteering to take seniors and others to and from their local election centers or by handing out refreshments to citizens waiting in long lines to vote are just some of the ways to provide assistance on Election Day.

In September, the Baltimore City Board of Elections designated Morgan State University as an early voting and election day voting center. Early voting on Morgan’s campus began on Monday, Oct. 26, with more than 2,000 Baltimore City residents having visited Morgan’s Edward P. Hurt Gymnasium to cast their vote on the first day, marking the highest voter turnout among all of the Baltimore locations for early voting. Early voting at Morgan will continue until Monday, Nov. 2. On Tuesday, Nov. 3, Morgan will also serve as an official Election Day site along with 23 other city-wide locations.

About Morgan
Morgan State University, founded in 1867, is a Carnegie-classified doctoral research institution offering more than 126 academic programs leading to degrees from the baccalaureate to the doctorate. As Maryland’s Preeminent Public Urban Research University, Morgan serves a multiethnic and multiracial student body and seeks to ensure that the doors of higher education are opened as wide as possible to as many as possible. For more information about Morgan State University, visit www.morgan.edu.