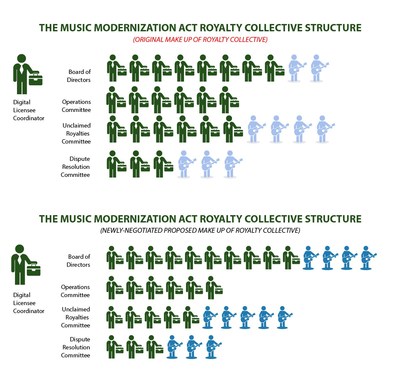 Proposed changes to the Music Modernization Act would give greater representation to music creators and independent publishers seeking a voice in how they are paid. (PRNewsfoto/Songwriters Guild of America)

Songwriters Guild of America Announces That Negotiated Changes to Music Modernization Act Enable Endorsement of Bill’s Passage
Music Publishing Industry Support for Small Claims Act Also Secure The Songwriters Guild of America, the largest and longest-established music creator organization in the United States, today announced it has negotiated changes to the pending Music Modernization Act (HR 4706) that will enable it to support passage of the legislation.  Among the agreed-upon amendments to the bill are:

As part of the discussions leading to changes in the Music Modernization Act, the US music publisher community has also pledged to lend its full support on Capitol Hill to SGA’s efforts to secure quick passage of the pending Copyright Alternative in Small-Claims Enforcement (CASE) Act of 2017 (HR 3945). CASE will provide music creators with a much-needed alternative to expensive copyright infringement actions against unlicensed users of their music.

Speaking on behalf of SGA, multi-platinum songwriter and organization president, Rick Carnes, noted that, “The benefits of the pending Modernization law, with the changes SGA has successfully sought, have made the current bill deserving of our support.  We continue to applaud the efforts of members of the music creator and publishing communities seeking further improvements that would make the proposed legislation even more advantageous to American songwriters, composers and independent publishers.

Still, the bill as it now stands would — on balance — benefit those creators we are sworn to protect significantly more than no bill at all.  Our two-word mission statement is to ‘protect songwriters.’ After more than six months of hard work alongside our colleagues at Music Creators North America (MCNA), SGA feels, individually, that it succeeded insofar as possible in carrying out our mission.”
Under the agreed-upon changes, the Mechanical Licensing Collective board will now have four professional songwriter/composer voting members and ten voting music publishers.

The Unclaimed Royalty Oversight Committee, whose role will be to oversee ownership and distribution of so-called “unclaimed” royalties, will now have evenly balanced, “five and five” representation among ten voting members.  As to clarifications regarding payment of music creator royalties received from the Collective by music publishers, the bill is now clearer in spelling out that such royalties are to be distributed on a title-by-title basis to songwriters under the percentages set forth in their publishing agreements.

In other words, a songwriter or composer operating under an agreement that gives a creator the benefit of a 90%/10% split with its music publisher will have that same split-applied in the distribution of “unclaimed” royalties that have been matched under the usage formula set forth in the legislation.
Other benefits of the legislation include the establishment of a system that:

“Among SGA’s important roles following the bill’s enactment,” continued Carnes, “will be to assist the songwriter and composer community in making sure that every music creator receives the full benefits intended under the Act.  That includes publication of materials designed to inform and remind creators, in consultation with their legal and financial representatives, how best to ensure the maximum receipt of all royalties to which they are entitled.”

Carnes also pledged that SGA will be in the forefront of efforts, along with its fellow MCNA music creator groups, to ensure that experienced, knowledgeable and — above all — independently-minded songwriters and composers are tapped to serve as board members of the Collective.