Radio Facts: Radio Facts: Radio revenues for Q4 and Full-Year 2013 were flat against comparable 2012 periods which had been buoyed with an influx of political spending at the culmination of the presidential campaign. Final figures were $4.602B and $17.649B respectively.

“Digital continues to gain momentum among advertisers looking to maximize their use of all Radio platforms,” states Erica Farber, President and CEO of RAB. “Based on the recent Borrell Associates forecast of a 22% rise in Digital spending on Radio in 2014, this category is poised to surpass the $1B mark.”

Automotive retained its position as Radio’s top Spot category based on 2013 full-year spending, followed by Communications, TV/Networks/Cable, Restaurants, and Financial Services – these five categories representing Radio’s top echelon consistently since 2009. Based on competitive factors within their respective industries in 2013, only Communications and TV/Networks/Cable have shifted their positions within Radio’s Top 5 this year. 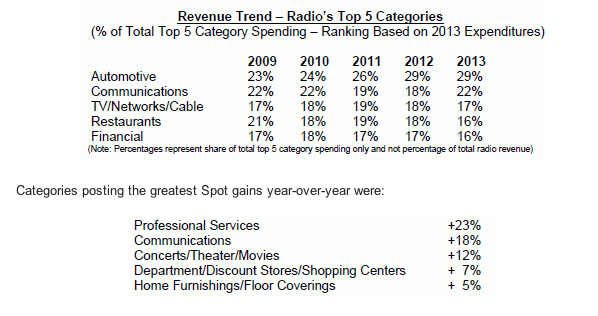 “The list of categories with upticks underscores Radio’s efforts to diversify and expand revenue growth beyond the top five,” Farber added. “Advertisers within these categories continue to recognize Radio’s contribution to the successes that advertisers in the top tier categories have experienced and want to tap into it.”

The “who’s who” of Spot Radio’s leading advertisers of 2013 is heavy on Communications category advertisers (4 of the top 10), yet the list contains representatives from TV/Networks/Cable Providers, Restaurants, Insurance, Grocery/Convenience Stores, Automotive, and Beverages – again underscoring Radio’s utility to advertisers of all types of products and services. 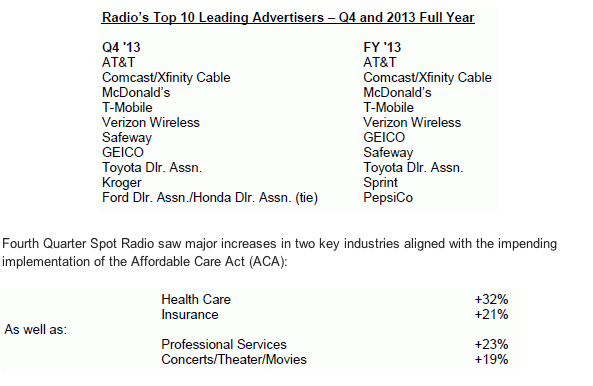