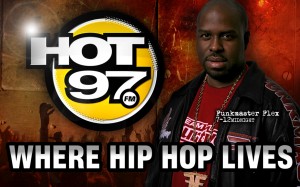 THE HOTTEST INTERNATIONAL DJs IN HIP HOP HIT THE AIRWAVES EVERY MONDAY 2 a.m. TO 3 a.m.

April 1, 2013 (New York, NY) ““ HOT 97 WQHT FM has partnered with world renown companies Pepsi and Ultra Mobile, as well as TriHonda Dealers, the premiere car dealership group for New York City, to bring a new type of Hip Hop and R&program to music enthusiasts in the New York tri-state area.   Starting Monday, April 1, 2013, the HOT 97 International Hour features prominent disc Radio DJeys from around the world spinning a mix of America’s hottest Hip Hop and R&artists as well as international hits from their home countries.     HOT 97 is globally recognized as the premiere source of Hip Hop and R&B.   This new venture will support international businesses in not only reaching new demographics worldwide, but also help expand brand loyalty locally by supporting new styles of Hip Hop and R&in New York, home of the largest collection of Hip Hop and R&fans.

Alex Cameron, HOT 97 SVP/General Manager, states, “HOT 97 is the best in breed of Hip Hop brands with fans worldwide.   Asia and Europe are some of our biggest fan bases outside of the US and overnights is the right place to start introducing some of that flavor and saluting the incredible diversity of our audiences, beginning with Japan where it will be prime time.”

The epitome of Hip Hop and HOT 97 transcends beyond radio to music fans all over the world.   Beginning in Japan, one of the most forward-thinking and musically influential cultures worldwide, the HOT 97 International Hour is geared up to take the radio world by storm.   In conjunction with this innovating and cutting edge radio programming, HOT 97 and its partners look forward to bringing the greatest international DJs to New York to perform at SOBs, the trendiest club for Hip Hop and R&talent to hit the stage.

“HOT 97 is more than just the station where Hip Hop lives; HOT 97 is the global ambassador of all things Hip Hop and R&B,” affirms Ben Finley, VP Branded Entertainment and Digital Sales Manager for HOT 97.   “With the realm of Hip Hop reaching new corners of the world, HOT 97 and its partners stay on top of the current trends and talent in the business.   We are excited to showcase the Hip Hop talent from Japan and look forward to expanding the International Hour across other countries, as well as hold live performances featuring international stars at the legendary SOBs club in New York City.”

The first HOT 97 International Hour featured a member of the Heavy Hitters hailing from Japan, DJ Lead.   Known as the “King of Japan,” DJ Lead was born and raised in Kyoto, where he cultivated his love of turntables and Hip Hop.   After travelling the world performing in the top clubs in Europe and Asia, DJ Lead arrived in New York City and quickly became a force to be reckoned with.   While opening for the top DJs in NYC, DJ Lead caught the eye of Heavy Hitter President and HOT 97’s own DJ Enuff, who offered Lead the position as the first and only Japanese Heavy Hitter.

Ebro Darden, HOT 97 Programming Director, adds, “HOT 97 has a huge fan base in Japan, so being able to collaborate with advertisers to highlight a DJ from Japan is super innovative and cool. Let’s go DJ Lead!”

In addition to bringing Hip Hop from Japan to the HOT 97 airwaves, HOT 97 is also a source for the best Japanese culture NYC has to offer.   Tune into HOT 97 for your chance to win tickets to Brooklyn Botanic Garden’s “Sakura Matsuri” celebration of traditional and contemporary Japanese culture on Saturday, April 27 and Sunday, April 28 from 10 a.m. to 6 p.m.   The festival includes Japanese dance, music, decorative art, martial arts, special tours and much more!   Check out the complete schedule of events on BBG.org.

Be sure to tune into the HOT 97 International Hour every Monday from 2 a.m. to 3 a.m. on channel 97.1 FM, via the HOT 97 app available for all smartphone devices, or online at HOT97.com.