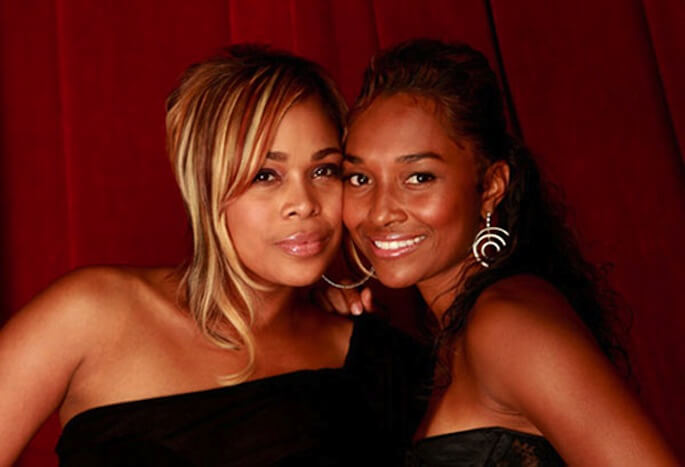 I don’t know if I have ever been to a concert where 30 to 40 year-old fans were so engaged to the point they dressed with oversized jeans, black stripes underneath their left eyes, and crazy hats to express their love for T-Boz, Chilli, and the deceased Lisa “Left Eye” Lopes.”  This was the scene at The Venue inside the Horseshoe Casino in Hammond, IN this past Sunday evening. Hosted by Soul 106.3’s Alexx Dupri, who did an excellent job of taking us back while reminding every one of TLC’s countless hits, the stage was set for  TLC to show and prove why they are the top-selling female group of all time.

As T-Boz and Chilli hit the stage the crowd was in an absolute frenzy and they didn’t disappoint. Backed up by a slew of dancers and accompanied by Lil Mama, who laced the classic Left Eye line, “Yo T-Boz is ya being a boss/ Chilli what’s up wit’ dat sauce?/ Dis is it/ Yo “T” step on that shhhh…,” the show got off to a phenomenal start as they went into a hyped up rendition of “Ain’t Too Proud to Beg” and other classics from their first album.

The party continued from there as T-Boz set the tone with her sassy like stage savvy as she let everyone know that we were, “about to get sexy up this muthaf*cka!” With songs like “Red Light Special,” Chili showed off her sex appeal in a different way with a sensual chair dance that she advised all the ladies to practice. In typical TLC fashion, they gave us the classics but they also showed off their unique ability to blend the old with the new as they hit that “Nae Nae” dance and flexed a little booty poppin’ to some ATL crunk music. If that wasn’t enough, they invited everyone in the house to report to the stage so what started as a concert, turned into the ultimate house party as we grooved to “Creep,” waved our hands from side to side during “Unpretty,’ and two stepped to “Baby Baby Baby.”

Feeling like a classic 90’s music video, the show took me back and it was quite nostalgic. Although Lil Mama filled in nicely as she made spot appearances throughout the night, it just wasn’t the same without the energy of Lisa “Left Eye” Lopes. She was really missed during the performance of “Waterfalls,” where T-Boz and Chilli reminded us that the chart topping song was Lisa’s favorite.

As the night came to a close, T-Boz and Chilli performed their new single “Meant to Be” to crowd of 30 to 40 year olds that got the chance to relive their teenage years all over again. Being the gracious young women that they are, both T-Boz and Chilli hung around after the show for as long as they could to sign as many autographs as possible. It was as if they were answering their “Fan Mail” right on stage. As everyone exited The Venue, I was reminded that TLC still has a loyal following and we were all on the TLC tip!