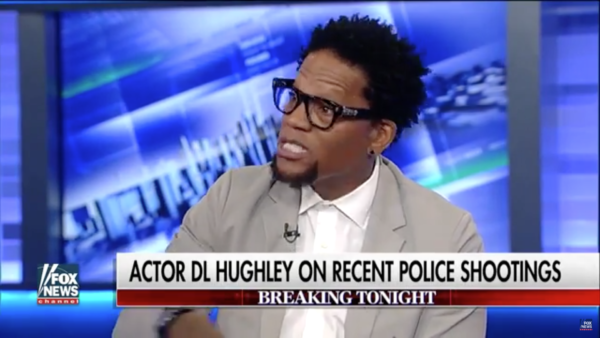 Despite his position in radio, comedy, television, and film, D.L. Hughley never hesitates to speak his mind. He truly tells it like it is, which is why he garners so much respect among his peers, fans, and followers.Hughley made an appearance on Fox News’ Kelly Files to discuss the recent police shootings and promote his new book, “Black Man, White House.” DL was speaking on the unfortunate death of Philando Castile but he became visibly upset when he learned Mark Fuhrman was also invited on the Fox News show to comment on police shootings. Everyone should recall Mark Fuhrman as he was convicted of perjury after denying the use of the word “Ni&&er” in the infamous 1995 O.J. murder Simpson trial. We all know how Fuhrman impacted the trial but but back to the lecture at hand.Hughley and Kelly went back and forth, talking over one another as they discussed the Mike Brown case as well but the gloves came off when DL just told it like it was.”The only place racism doesn’t exist is Fox News and the police department,” Hughley sarcastically said. “That’s absolutely true.””That’s insulting,”  Kelly said. “You just insulted millions of people watching this channel.””And I’m insulted by the things I hear on this network, so we’re even,” DL replied. “I could care less about insulting people that insult me on a daily basis.”The conversation continued from there as Megyn Kelly was able to deescalate the debate by finding some common ground to focus on. Don’t take our word for it, check out the clip below.https://youtu.be/FXtikHLAJHA