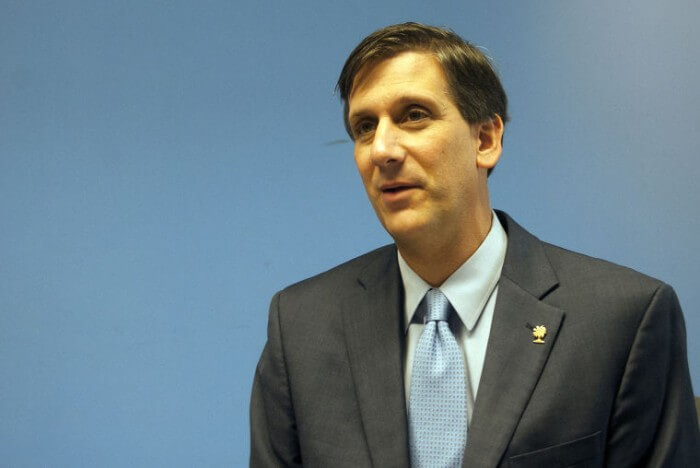 Gubernatorial candidate Sen. Vincent Sheheen stood with Lt Governor candidate Rep. Bakari Sellers and supporters in the midlands to call for the Confederate flag to be moved from the Statehouse grounds and replaced with the American flag instead.“Today, we are charting a new path for South Carolina focusing on the future, not the past. Leadership matters, and we must speak up for things that are right and abandon the divisive politics of the past,” said gubernatorial nominee and state Sen. Sheheen. “To compete in the global economy we must welcome and keep the best and the brightest, so we must fly a flag that brings us all together. We must be a state that looks forward, towards a future of possibilities not backwards to discord. To honor our forebears and to promote unity, it’s time to move the Confederate Flag from the front lawn of our Statehouse.”The Confederate flag was placed atop South Carolina’s Statehouse dome in 1961. In 2000, legislation was passed to remove the flag from the dome and instead fly the flag over a monument on the front grounds of the State House, where it continues to fly today. The flag has been the center of controversy for many years, resulting in economic boycotts and sporting event bans in South Carolina.“Honest leadership matters — for our communities, to honor our heritage, but to also improve our future. The message we send as a state is important, and we can do better than the politics of division,” said Lt Governor candidate and state Rep. Bakari Sellers. “It’s time to embrace unity and move us toward a brighter future by flying the American flag on the front lawn of the Statehouse.”Mayors from major cities around the state also wrote Sen. Sheheen a letter of support for the effort today, citing the moral and economic implications of flying the confederate flag.

President Obama Speaks on the Potential of a U.S Ebola Crisis

Florida Clergy Leaders Focused on Getting Souls to the Polls

The 2016 Presidential Polls Are Leaning Toward…

Stanford Psychologist Wins A MacArthur Genius Grant, Shows How Unconsciously Racist Everybody Is

BMG Harnesses the Power of Music with EP Inspired by Holocaust...

Michael Mitchell - September 23, 2020 0
Refugee and Covid-19 Projects to Follow as BMG Introduces Inspirational New ‘Soundlab’ Series with the Global Classroom in Collaboration with the World...

BMG Harnesses the Power of Music with EP Inspired by Holocaust...