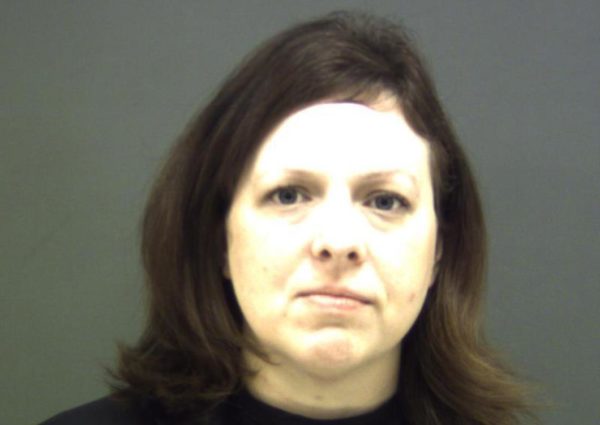 Ashli Acker-Dansby is the News Director for KMHT Radio Marshall 103.9 FM but unfortunately more people know her name for the hit and run accident she was involved in this past Saturday where a female pedestrian was injured. She ran from the scene of the incident but the community in Marshall, Texas is more outraged by the length of time it took her to be arrested. The community is calling for justice as they feel the Marshall Police Department gave Ashli preferential treatment by not arresting her until Tuesday.
Marshall Police Chief Jesus “Eddie” Campa says he is “shocked and appalled” by the suggestion that there was any preferential treatment in the hit-and-run investigation. Although police were called to 33-year-old Ashli Acker-Dansby’s home shortly after the accident occurred, a warrant was not issued issued for her arrest until Monday.
“We couldn’t establish that she was behind the wheel so we didn’t have the probable cause to go any forward towards obtaining a blood drawn warrant,” said Campa. Outrage has since spread quickly through social media, accusing the Marshall Police Department of special treatment of Dansby due to her position.
One of many town resident suggested Dansby must have been drinking and driving, “If this had been anyone else in this town, they would have been arrested right after the call to the police had been made. Seems like they should have went to the home and tested both of them for alcohol. Guarantee she was drinking and driving,” said one Marshall resident.
An alleged relative of the hit and run victim posted a message via social media stating, “I don’t understand, how the police knew, who was the driver, that hit Evelyn, and let the scene, of the accident, at Caddo and Highway 80, and didn’t stop to see if she was dead or alive, thank God her boyfriend was with her, and called for help. She is a relative of (mine), and a citizen of this community. I pray that she recovers, from this accident, she was (released) from ICU today, and off of the breathing machine, to see how, she would do, keep her in your prayer.”
Campa was obviously upset by the allegations from the community and he is worried about losing the trust of the community as well. “It does aggravate me it makes me very very upset, for people in the community to even think, that this department would take part in anything like that.”
“We have been inundated with messages both on my professional page and my personal page,” said Campa.
As a result of the many complaints and allegations from the citizens of Marshall of both messages and phone calls, Chief Campa felt the need to make a point to shed some light on the investigation.
“I can assure you 100 percent that is not the case and preferential treatment was not given to anybody,” he said. He says the delay Dansby’s arrest was because police followed protocol to consult with the district attorney’s office first.
“This is how we would have handled any other case, the only reason why its getting so much attention, because of who the driver of the vehicle was,” he said. Police say Dansby struck a woman in the street with her Toyota just after 1 a.m. Saturday on Caddo Street and Victory Drive. The Marshall resident radio host turned herself in early Tuesday morning on a third-degree felony charge of failure to stop and render aid.
Dansby was released on bond from the Harrison County Jail a few hours later.