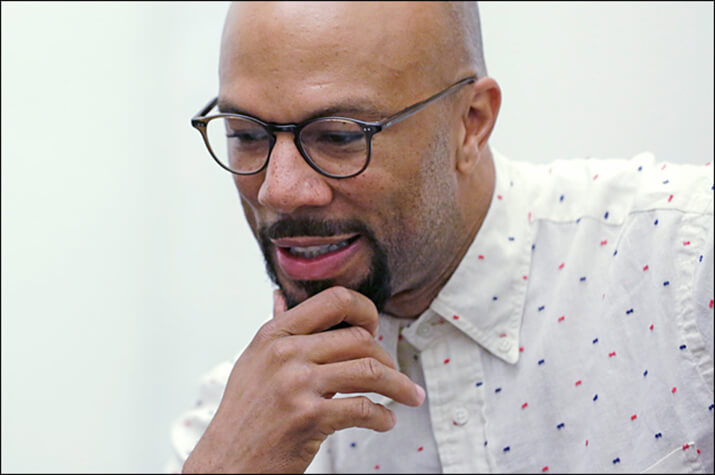 Common, and the Common Ground Foundation, Andrea L. Zopp, president and CEO of the Chicago Urban League, and Kanye West’s Donda’s House, Inc. Creative Director, Rhymefest held a press conference at Chicago’s Museum of Contemporary Art, to discuss the state of their organizations, upcoming projects and announced the Chicago Youth Jobs Collaborative. The groups united for Chicago youth to advocate and garner commitment in organizing government, nonprofit and for profit stakeholders to push for more funding and resources to create youth employment opportunities. With the common missions threaded through each organization as well as their distinct influence in specific communities, the groups rallied to both challenge themselves and others to create job opportunities for youth, year round.

The Chicago Youth Jobs Collaborative is a movement to organize public, private and nonprofit stakeholders collectively to advocate for resources and support services to address youth employment needs. This collaborative is a strong, youth-centered effort focused on securing year round jobs for young people ages 16 to 24. Community partners include: Alternative Schools Network (ASN), Austin Peoples Action Center (APAC), Centers for New Horizons, Chicago Jobs Council and UCAN. In addition to inaugural partners, the collaborative looks to secure partners in the private and public sectors. Launching in the fall of 2014, in the first year, The Chicago Youth Jobs Collaborative seeks to provide year round jobs to a minimum of 1,000 youth with the intent to increase this number by one thousand per year over the next four years, for a target of 15,000 youth impacted over the next five years.

“Today we issue a call to action to the public, private and non-profit sectors to join this effort to make year round investments in our youth. Summer jobs provide tremendous opportunities, but we often hear strong pleas from young people for year round jobs,” said Andrea L. Zopp, President and CEO of the Chicago Urban League. “In addition to providing financial resources and a strong work ethic, jobs keep youth out of harm’s way. Year round job opportunities and support services will significantly improve the well-being of our youth and strengthen our city. We owe it to our young people to make this investment in them.”

The Common Ground Foundation and Donda’s House, Inc. also announced the launch of an Annual Music Festival, The AAHH! FEST, with proceeds from the Festival supporting the Common Ground Foundation, Donda’s House, Inc., Arts Education in Chicago Public Schools, and Year-Round Youth Jobs initiatives. Specific event plans leading up to the festival can be found at www.dondashouseinc.org or www.thinkcommon.com.

“Donda’s House Inc. is thrilled to partner with the Common Ground Foundation & Chicago Urban League along with several other community organizations across the city to host Open Mics, giving youth the opportunity to express themselves in a safe and nurturing event. Talented youth will be selected to showcase at the AAHH!! Festival in September” said Donnie Smith, Executive Director of Donda’s House, Inc.

The AAHH! FEST, will be held September 20-21, 2014 at 6300 S. Hayes Drive. Day One will feature a diverse, all-star line-up of talent from across the country and Chicago. Day Two, will be curated by Kanye West’ foundation, Donda’s House, and showcase Chicago’s aspiring talent. The AAHH! FEST will also host a job-shadowing program, which allows youth to learn operations connected to producing a high-level outdoor special event.

“With the joining of these great organizations, we hope to continue the efforts of so many other organizations and the City of Chicago to create opportunities throughout the year for our youth and challenge our city to do even more on the ground. Our efforts will culminate in a musical celebration every year that will include resources offered to Chicago kids, directly related to placing them with an opportunity that can provide them hope and stability,” says Common.