Last night as I tuned in to watch the season premiere of Scandal, It seems that the entire world did as well. My timelines on Facebook and Twitter were full of Scandal rhetoric all day.  From watch parties, Olivia Pope praises,  to people being pissed that they thought a potential speech from the President about the Capitol Hill incident would interrupt their favorite show,  Scandal controlled my social media profiles before, during, and after the show.

In the first episode, Shonda Rhimes and her team of writers brought their “A” game. With lines like “I am the hell and the high-water” or “You have to be twice as good as they are to get half of what they got” delivered by actor Joe Morton, who plays Olivia’s dad, reminded me of conversations many Black parents have had with their kids.

The lines ” that poor sweet brown baby you’re dragging into your Godless homosexual lifestyle” delivered by Kate Burton who plays the Vice President reminded me of the ongoing conflict of how we view homosexuality in this country.

Actor Jeff Perry, who plays Cyrus also went there with the line, “The Lord does not have the right to vote in the United States of America.” People on my timeline acted as if he said Jesus didn’t exist but that is the power of this show.

Columbus Short may have delivered the line of the night as he said, “Are we Gladiators or are we Bitches?” My timeline went absolutely bananas when he delivered the short but powerful line that reminds us all why Scandal is such a good show. From the women raving over Olivia’s white coat to the men questioning their manhood just for watching the show, this show definitely resonates with the people.  Not to mention the brilliance of the cast live tweeting while the show is on to keep their followers engaged.

The season premiere of Scandal did not disappoint and neither did the world of social media responding to it. Check out some tweets below from a few people you may know. 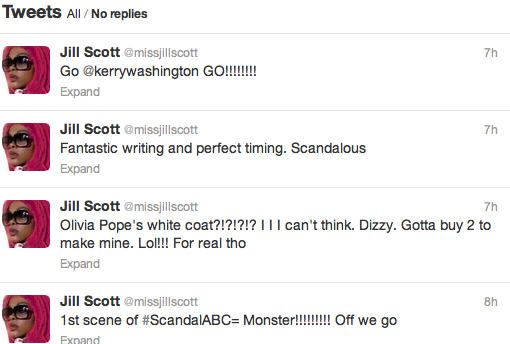