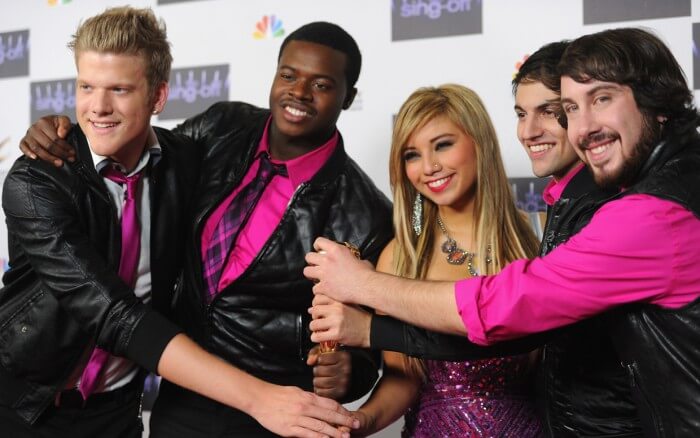 RCA Records is excited to announce the signing of vocal sensations and internet phenoms Pentatonix. Since their debut in 2011, the quintet has released 3 albums (PTX Volume 1, PTXmas and PTX Volume 2) selling over 500,000 copies combined. Online, the Pentatonix YouTube channel boasts well over 445 million views with more than 5.6 million subscribers, is the #61 most subscribed-to channel and #16 most subscribed-to music channel. The group recently sold out their 32-date North American tour and is currently on a sold out European tour, which concludes May 18th in Dublin, Ireland.

“We are thrilled to have Pentatonix join RCA,” says RCA President & COO Tom Corson. “Their musicality and special vocal abilities have enabled them to create innovative original songs as well as re-create some of today’s biggest hits. Pentatonix is unique to our business and we look forward to working with them as we take their talents to new and exciting heights everywhere in the world.”

“We’re really excited to start this new chapter of our career with RCA,” says the group. “We feel like we’ve found a home where we can truly develop our artistry with the best in the industry.”

Pentatonix consists of lead vocalists Scott Hoying (22), Kirstie Maldonado (21) and Mitch Grassi (21), vocal bass Avi Kaplan (25) and beatboxer Kevin “K.O.” Olusola (25). Their most recent album PTX Volume 2 debuted at #10 on Billboard’s Top 200 Album Chart and features 3 original songs and 5 covers including a 7-song Daft Punk medley for which the video has garnered over 65 million views. PTX Volume 2 follows PTX Volume 1 and PTXmas. Both albums originally debuted on Billboard’s Top 200 Chart and re-entered the chart in December 2013, with the deluxe version of PTXmas leading the charge. With the addition of new tracks “Little Drummer Boy” and “Go Tell It On The Mountain,” PTXmas has sold more than 200,000 copies and reached #1 on Billboard’s Digital Albums Chart. The video for “Little Drummer Boy” was a worldwide hit, racking up over 30 million views while the song landed at #13 on the Billboard Top 100 Singles Chart as well as #1 on Billboard’s Holiday 100 and Holiday Digital Songs Chart.