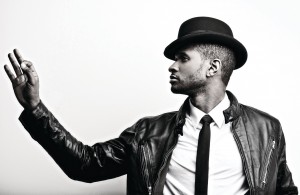 The invitation-only event will take place on Thursday, June 27th, 2013 at the Beverly Hilton Hotel in Los Angeles, California. ASCAP’s Golden Note Award is presented to songwriters, composers and artists who have achieved extraordinary career milestones.

“I’ve been blessed to have such a wonderful career, working with some of the most talented people in the business, and I am just getting started!”ascap President and Chairman Paul Williams commented: “Usher’s musical evolution over the years clearly proves his versatility and longevity as an artist, performer and songwriter.

The world has moved to his music for nearly two decades. Happily for the rest of us, from the sound of his latest work, it’s clear that the beat will go on and on. Usher is the perfect candidate to receive one of our top honors ““ the ascap Golden Note Award.” “We at ascap have been a fan and advocate for Usher since day one.

The album, which has since been certified 6-times platinum by the RIAA, displayed Usher’s talent for songwriting by co-writing six of the nine songs. His third studio album, 8701 (2001), quickly reached multi-platinum status and went on to sell over four million copies, bringing Usher his first Grammy win in 2001 for Best Male R&Vocal Performance; a category in which he repeated a win in 2002 for “U Don’t Have to Call.”

His next album Confessions (2004) took the music world by storm and is Usher’s most successful album to date, making him the first artist to top the charts with four consecutive number one songs (“Yeah,” “Confessions, Pt. 2,” “Burn,” and “My Boo”).

His most recent albums ““ Here I Stand, Raymond v. Raymond and Looking 4 Myself ““ introduced the world to several massive hits, including “Love In This Club,” “DJ Got Us Fallin’ In Love” and “Scream.” The RIAA ranks Usher as one of the best-selling artists in American music history, having sold over 23 million copies in the United States alone.

To date, he has sold over 50 million records worldwide, making him one of the best selling music artists of all time.The 26th annual ascap Rhythm & Soul Music Awards will also honor the songwriters and publishers of the most performed ascap songs on the 2012 R&B/hip-hop, rap and gospel charts.

Top awards will be given to the Songwriter of the Year, Publisher of the Year, Top R&B/Hip-Hop Song, Top Rap Song and Top Gospel Song. The evening will also feature performances by several award-winning songwriters/performers.