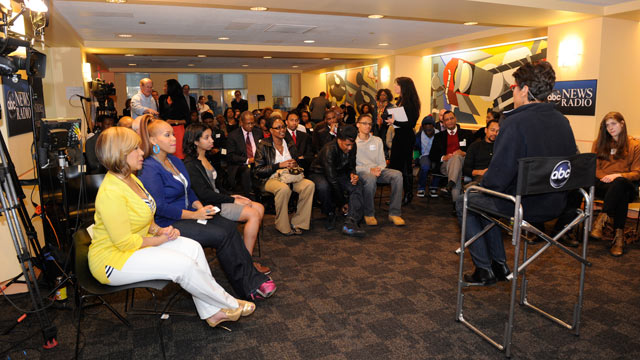 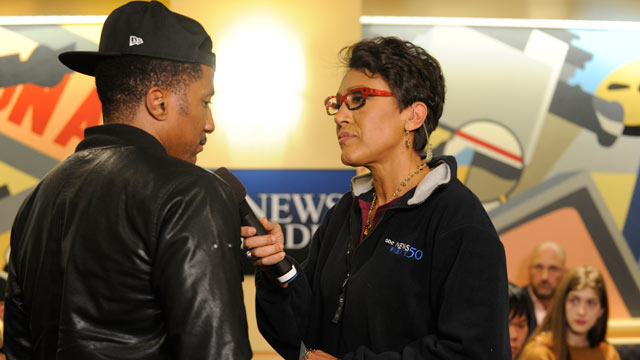 By JOSHUA COHANMarch 28, 2012″Not again,” rapper Q-Tip recalled thinking when he learned of the shooting death of Trayvon Martin, an unarmed black teenager, by a self-appointed neighborhood watch captain in Sanford, Fla.”I think it’s time that we as a nation, if we can gain anything from this, it should be a moment of introspection,” he said.

“And we should really have the kind of conversation that could really fix it.”His comments came during a live town hall-style radio show, “Race and Justice: A National Conversation,” hosted by “Good Morning America” co-anchor Robin Roberts Wednesday night from ABC News headquarters in New York City, and amid continued allegations of racism, scrutiny into how local police handled the investigation into Martin’s death, and a nationwide outcry for justice.

Leaks from the police report detail Zimmerman telling police he was heading back to his truck when Martin knocked him down with a punch to his nose, jumped on him, repeatedly banged his head on the ground, then tried to grab Zimmerman’s gun. In a struggle for Zimmerman’s gun, the watchman shot the teen, Zimmerman told police.

It remains unclear exactly what prompted the altercation that ultimately led to Martin’s death, and Zimmerman, who claimed that he acted in self defense that night, has not been charged with a crime.Martin was wearing a hooded sweatshirt and carrying only a pack of Skittles and a bottle of iced tea at the time.

Police brought Zimmerman into the station for questioning for a few hours on the night of the shooting, Zimmerman’s attorney said, despite his request for medical attention first. Ultimately, they had to accept Zimmerman’s claim of self defense.”It makes me so concerned for my nephews and for my brother, for my husband, for my son, who’s only two.

It just makes me fearful,” Tina Campbell of the music group Mary Mary told Roberts at Wednesday’s town hall. “And I pray that this conversation makes us open our eyes that we change things and there is justice for Trayvon.” “I think we need to reevaluate some of the laws,” said Erica Campbell, the other half of Mary Mary.

“And you’re alive and walking away while he’s in a body bag?” she asked. “Come on.” In video surveillance obtained by ABC News from the night Martin was killed, a handcuffed Zimmerman appears uninjured as he exits a police cruiser and walks into the Sanford Police Department. Joe Oliver, who describes himself as a close friend of Zimmerman’s family, has said that Zimmerman is in hiding and fears for his life.

The Black Panthers have put up a $10,000 bounty for Zimmerman’s “capture.” “What mortifies me is that someone like this who is running around stalking people, looking for a fight, that someone like that could even have a gun in the first place,” one student said at the town hall, to strong applause.

Taiesha Davis, a social worker, says she has been talking openly with her son for years about how to stay safe. It began with Sean Bell, she said. Now this has revived the conversation. “I always tell my son, ‘Just watch your surroundings, pay attention, don’t look suspicious, take your hood off your head, make sure people can see your face, walk a straight line,'” she said.

“Because you never know when something can occur.” “I have been stopped before,” said Davis’ 15-year-old son, Tyquan Davis, who stands at 6-foot-2. “And it just made me feel like a criminal. Like, there was no reason for them to stop me. But I look suspicious apparently.” Martin’s death has sparked powerful reactions from political figures to entertainers and professional athletes.

Across the nation, teams of organizers pushing for Zimmerman’s arrest have staged rallies, protests and walkouts. More than two million supporters have signed an online petition calling for Zimmerman’s prosecution. Last week, Miami Heat star LeBron James tweeted a photo of himself and his teammates wearing hooded sweatshirts, their heads bowed in Martin’s honor.

“I’ve applauded their actions,” sports commentator Stephen A. Smith said when asked about James’ tweet, “simply because it’s rare that I get an opportunity to see athletes stand up for something in this day and time. They just don’t do it.” “A lot of times, you know, when you look at it in terms of their advertising, their marketing dollars, their marketability, their brand, they think it’s something that could ultimately compromise them,” Smith said.

“And because of that, they’re a bit apprehensive about stepping forward. So, I’ve applauded them on this.” Asked by Roberts if he thinks the team will continue to bring light to the situation involving Martin, Smith said that remains to be seen. “I think it is an opportunity,” he said. “There’s no doubt about that.

But again, at some point in time they’re going to be confronted about the big elephant in the room that some of them are not going to want to address.” “Let’s be honest about something here,” Smith added.

“While we all can look at this case and question a lot of things that have gone on and look at this individual, Mr. Zimmerman, and say at the very least, he should’ve been arrested because a 17-year-old unarmed boy is dead. At the same time, once you get beyond that and we start getting into the problems that permeate throughout community, you have to deal with what’s going on in our community — the fact that we’re doing a lot of damage to each other.

“When you are a black athlete, and you are out there, and you receive the level of support that these athletes received from those within our own community,” he said, “and then you got to turn around and shine a light on the inequities that take place in our community, that are instigated by us, then all of a sudden, it becomes a bit more problematic, and something that they don’t want to touch.

But you can’t really resolve the problem without attacking that part of the problem. And they’ve got to have the guts to do that, and I’m not sure they do. “Actor and activist Hill Harper said, “We’ve all been talking about justice, but there’s a word that goes with justice that’s inextricably linked to it, and that’s truth.”

“You can’t have justice unless you have truth,” Harper told Roberts. “And the problem with this case is that it’s actually emblematic of the general racial discussion that we really don’t talk about the truth of what’s happening. “Referring to the controversial “Stand Your Ground” law at the center of the case, Harper said, “When I was in law school, we had this idea of fruits of a poisonous tree.

This law is basically — poisonous trees can still bear fruit. You think about the N.R.A. lobby and you think about where these types of laws grow up from. They’re very politicized laws. They’re not necessarily laws that are for the community and for folks to live better. They’re actually politic-driven.

So, it’s the fruit of the poisonous tree. … That’s the truth that we have to talk about.””[W]e’re talking about what young black men have to do,” he added. “We know if you grew up in a black family, there’s that internal dialog which happens within our community, within the family. You know, when I get stopped by the police, I keep my hands on the wheel. I’m not going to move.”

“But the bigger conversation,” Hill said, “the best way to protect young black, brown, men of color, women of color, is to actually stop profiling, stop the prejudice and stop the judgment first. And that requires a truthful dialog, like what we’re having now. “Hill urged the nation’s educators “to be truthful about the issue,” and suggested it will be then when “we actually move the discussion forward.”

Madeline, a high school student, agreed that more needs to be done in schools. “I honestly think that there is not enough dialog going on about these issues,” she told Roberts. “People shy away from them when you bring up things like this. People don’t want to talk about it. They’re worried they’re going to sound racist.

They’re worried they’re going to offend people. “But I honestly think that the way that — the only way that we’re going to really figure out what the root of this problem is kind of by talking about it, and by really figuring out what we can do as young people to prevent this in the future,” she said.

“And I honestly think that this needs to start in high schools. … We should just be really speaking about this more, and figuring out what we can do.” Pastor A.R. Bernard said that “no matter how educated and upwardly mobile a young black male becomes, he still lives haunted by the reality that he’s suspect because of the color of his skin.”

“What do we do, Reverend?” Roberts asked. “It begins here with conversation,” Bernard said. “It begins holding not just the black community, but the white community responsible for being naive in thinking that they can be at ease, because everything is resolved because there’s a black president. And everything’s changed.”

Harper praised the pastor’s suggestions. “I think he’s absolutely right about the conversation,” Harper said. “But we can also look to examples of individuals and groups that have sought to deal with prejudice in different ways — for instance, the gay community around HIV and AIDS issue.”

Radio Facts - January 6, 2021 0
Best Cities to Live in For Musicians and Average Rent Prices per CityRadio Facts: "Back in the day on the boulevard of Linden, we...

Is Tom Joyner and Steve Harvey the BEST we can do...

DATARI TURNER & THE BLACKHOUSE FOUNDATION PARTNER WITH FACEBOOK TO LAUNCH’SEEN’...

INSPIRED BY THE FIRST DATE OF BARACK AND MICHELLE OBAMA AVAILABLE...