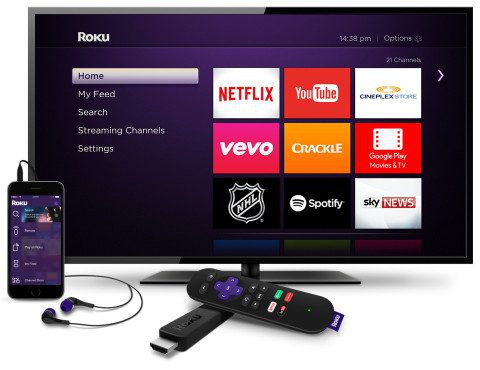 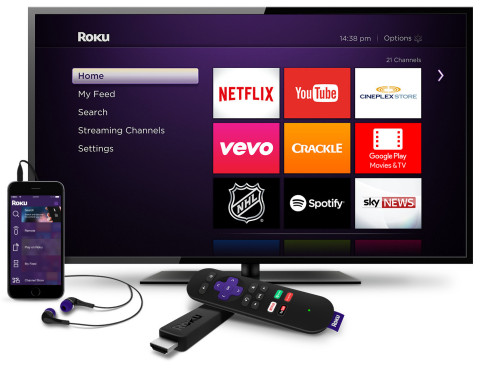 Roku Inc. today announced the new Roku® Streaming Stick® designed for streamers who are looking for the ultimate in power and convenience in a sleek, pocket-sized form. Priced at just $CAN 59.99, the latest model of the popular device has been developed with a focus on performance and features a quad-core processor giving it more processing power than any other pocket-sized stick in the industry.

Consumers appreciate having access to the complete Roku streaming experience in a portable, low-cost device,” said Sharad Sundaresan, SVP product management for Roku. “The new Roku Streaming Stick takes our popular experience to the next level with a significant upgrade in power and performance, as well as features that are specifically designed to get people to the entertainment they want to watch quickly and easily whether they’re at home or on the go.”

Dual-band MIMO wireless for great connectivityIncluded remote for easy navigation and controlSmall, sleek design makes it simple to move between TVs in the home or use while traveling

Control with Roku Mobile App for iOS and Android – play personal video, photos and music on TV using the Play On Roku feature

Hotel and Dorm Connect for easy connection to wireless networks away from home.

The new Roku Streaming Stick runs Roku OS 7.1, the latest version of the company’s operating system, also announced today. Roku OS 7.1 enhances the search and discovery experience by adding new categories within Roku Feed that enable customers to view popular TV Shows and Movies in one place. Similar to the existing Movies Coming Soon feature, consumers can now easily view these new categories to discover popular movies and TV shows across a variety of streaming channels on the Roku platform.

They can then choose to watch a popular movie or TV show immediately, or Follow it in the Roku Feed to receive automatic updates when the availability or price changes, or the movie or TV show becomes available to watch for free.

Additionally, a feature available exclusively for the new Roku Streaming Stick enables consumers to use the Roku Mobile App for iOS and Android on their phone or tablet to listen through wired or wireless headphones.

The Roku Mobile App offers a companion experience and can act as a remote control, enable voice search or provide an on-screen keyboard. Consumers can use the Play On Roku feature within the app to stream their personal videos, music and photos to the TV using the Roku Streaming Stick. A Complete Streaming Entertainment Experience.

The new Roku Streaming Stick provides consumers with the complete experience of the Roku streaming platform in a small device. Consumers in the US have access to more than 2,000 streaming channels, including 100,000 available movies and TV episodes.

Unlike its competitors, Roku offers a comprehensive and unbiased universal search feature that looks across top streaming channels to return search results. In addition, the Roku Feed is a first-of-its-kind discovery feature that lets consumers know when favorite entertainment, such as movies and TV shows, becomes available for streaming – and at what price.

Ultimate PortabilityThe new Roku Streaming Stick is smaller than the previous version and has a compact, sleek design that makes it the ideal streamer for virtually any HDMI® enabled TV including wall-mounted flat screen TVs. Whether they want to move it between multiple TVs in the home, take it with them to a friend’s house, or pack big entertainment into their vacation; the Roku Streaming Stick makes it easy for consumers to stream wherever they go.

The new Roku Streaming Stick also includes the Hotel and Dorm Connect feature to make it easy for consumers to connect to wireless networks that require sign-in through a web browser like those commonly found in hotel rooms, college dorms and other public locations. Consumers simply connect their Roku device to the password-protected network, sign-in with their login credentials using the browser on their mobile phone, tablet or laptop, and they’re ready to start streaming.

Availability The new Roku Streaming Stick will be available later this month from Best Buy, London Drugs, Staples, Walmart, Amazon.ca, Shop.ca and others for an MSRP of $CAN 59.99.Roku OS 7.1 is available on the new Roku Streaming Stick. It will be rolled out to all other current-generation Roku players through a software update that is expected to be completed this month.

The update is expected to be rolled out to Roku TV™ models shortly after. The latest version of the Roku Mobile App for iOS and Android is available for download today. In addition to introducing new features for consumers, Roku OS 7.1 includes a number of platform updates and new software development kit (SDK) tools for Roku developers. Information for developers can be found on the Roku Developer Blog.

At the heart of the Roku streaming platform is the Roku OS, a powerful operating system purpose-built for the TV screen rather than being adapted from an existing mobile OS. Designed to run on affordable streaming players and smart TVs, the Roku OS gives consumers a superior entertainment experience while enabling channel developers to effectively grow and monetize their audiences through advanced development, billing, and advertising tools. Using the Roku SDK, content providers can quickly develop custom streaming channels and deliver content to millions of devices worldwide.

Roku is the creator of a popular streaming platform for delivering entertainment to the TV. Roku streaming players and the Roku Streaming Stick are made by Roku and sold through major retailers in the U.S., Canada, the U.K., the Republic of Ireland, France and Mexico. Roku licenses a reference design and operating system to TV manufacturers to create co-branded Roku TV models. Under the Roku Powered™ program, Roku licenses its streaming platform to Pay TV providers around the world who want to use the Internet to deliver entertainment services through streaming players.

Share
Facebook
Twitter
Pinterest
WhatsApp
Previous articleAmerican Dream Still Alive, But… How Much Better off Are Grown Children than their Parents Were
Next articleByron Allen Issues Official Statement On Comcast’s Recently-Filed Opposition Petition To The FCC

WEBINAR: Radio & Pureplays, Keeping the Ad Dollars that Belong to...