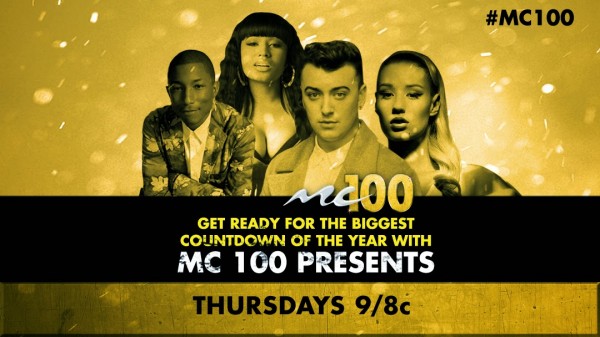 Music Choice’s annual “MC 100” list is a curated collection representing the biggest songs and videos that have aired over the past year across all Music Choice platforms, including MC’s Music Channels, Video On Demand platform and Music Choice Play. Several artists such as Beyoncé, Chris Brown, Usher, Jason Derulo, Demi Lovato, Katy Perry, One Republic, and others appear on the list more than once while new solo artists Sam Smith, Meghan Trainor and Nick Jonas have landed their first distinction on this year’s list.

Unlike other “Best of…” or year-end round up lists, Music Choice’s “MC 100” is aggregated using Music Choice’s extensive data impressions from TV, online and viewer interactions as monitored via Nielsen, Mediabase and Rentrak.  Mirroring Music Choice’s consumer experience, a song’s ranking on the “MC 100” list is determined by the number of MC Video On Demand orders by users, its rotation on MC Music Channels, viewer interactions and requests via Music Choice’s viewer cultivated linear channel Music Choice Play, and the artist’s impact on pop culture through social media. With over 57 million listeners and 1.1 billion annual video views, Music Choice is the ultimate destination for the best in music and video content and illustrates what songs and videos consumers actually want to hear or see rather than what programmers tell them they should hear or watch.

Damon Williams, VP Programming at Music Choice stated: “‘MC 100’ is the only year-end list that combines songs, music videos and fan engagement into one curated experience. What makes this year’s countdown even more compelling is that we also asked the biggest artists like Chris Brown and Sam Smith what songs they couldn’t stop listening to this year and some of their answers will surprise you.”

Leading into the launch of “MC 100,” Music Choice rolled out exclusive video content of artists on this year’s list talking about their hit songs and also presented this year’s outstanding artists with special awards such as “#1 Song,” “Best New Artist,” “Best Video,” among others.

The full list is available upon request, but fans can expect to hear, in no particular order:

Year of the Women: Beyoncé, Demi Lovato and Katy Perry hold the distinction of being the only artists this year to each hold three solo spots on the “MC 100.”

Iggy Azalea: With ‘Fancy’ becoming the song of the summer, and collaborating with other huge names in music such as Ariana Grande, Jessie J, Nicki Minaj, and Rita Ora, 2014 was a huge year for Iggy.

Collaborations: Iggy Azalea wasn’t the only one to collaborate with other huge artists this year. From Disclosure’s “Latch” featuring Sam Smith, Eminem and Rihanna’s “Monster,” and even Miranda Lambert and Carrie Underwood’s “Somethin’ Bad,” artists across genres joined forces to create some of this year’s favorite new music, all rightfully earning their spot on 2014’s “MC 100.

Chris Brown: The multi-platinum hip-hop star released his sixth album ‘X’ this year and his smash single “Loyal” quickly rose through the charts, much like Brown’s career.

British Invasion: Sam Smith, One Direction, Ed Sheeran, and Jessie J have crossed the pond and landed on this year’s list with hits like “Stay With Me,” “Story of My Life,” “Sing,” and “Bang Bang,” respectively.

Sam Smith: This British star emerged onto the scene with his collaboration with Disclosure on their hit “Latch,” and also landed his first solo position on this year’s list with his single “Stay With Me.”

Country Is Here To Stay: Florida Georgia Line, Lee Brice, Hunter Hayes and Dierks Bentley, not to mention Taylor Swift, Luke Bryan and Miranda Lambert all landed on this year’s list – reaffirming the walls between pop and country have been broken and country music is here to stay.

For more information about Music Choice log onto www.musicchoice.com