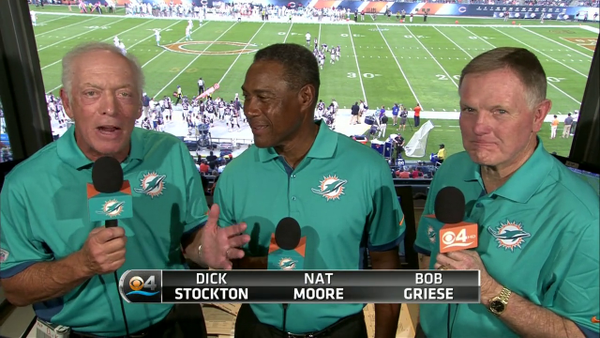 The Miami Dolphins announced their broadcast teams for the 2016 season, including preseason television and preseason and regular season radio.
Dolphins Hall of Fame quarterback Bob Griese and Honor Roll member Nat Moore return for preseason television broadcasts on WFOR-CBS4 with Dick Stockton on play-by-play and former linebacker/defensive end Kim Bokamper reporting from the sidelines. WFOR-CBS4 once again returns as the preseason home of the Dolphins as three of the four preseason contests will be shown on the CBS affiliate in the Miami-Ft. Lauderdale market. The N.Y. Giants, Dallas and Tennessee preseason games will air on CBS4, while the Atlanta preseason game will be nationally televised on NBC.
Pro Bowl defensive end Jason Taylor joins the preseason English radio broadcast team on Sportsradio 560 WQAM as an analyst alongside former Dolphins tight end Joe Rose with former wide receiver Jimmy Cefalo handling the play-by-play duties. During the regular season, Cefalo and Rose are joined by Griese with Bokamper reporting from the sidelines. All Dolphins games can be heard on Sportsradio 560 WQAM and KISS 99.9, the flagship Radio Station s of the Miami Dolphins Radio Network, Dolphins.com and throughout South and Central Florida on the more than 12 Radio Station s that make up The Miami Dolphins Radio Network. In addition to the game broadcasts, the Radio Station s will feature an expanded pregame show with Curtis Stevenson and former Dolphins linebacker Channing Crowder serving as hosts, a halftime show hosted by Kevin Rogers and a postgame show hosted by Orlando Alzugaray and former Dolphins running back Troy Stradford with live updates from Rogers.
1210 ESPN Deportes returns as the Dolphins official Spanish radio broadcast partner for all preseason, regular season and playoff games. Raul Striker Jr. will handle play-by-play duties with Eduardo Martell as a color analyst. 1210 ESPN Deportes additionally airs a 60-minute pregame show called “El Pre-Game de Los Miami Dolphins” and a 30-minute postgame show “El Post-Game De Los Miami Dolphins.”