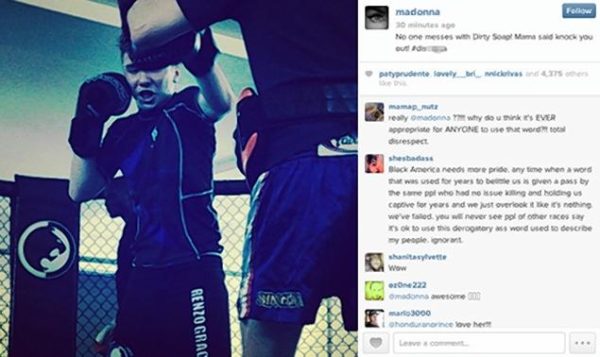 Madonna had Instagram going crazy on Friday night when she posted a picture of her 13-year-old son Rocco while he was at boxing practice. It wasn’t the photo that caused the stir; it was her caption that had quite a few people up in arms.The pop icon posted the following caption with the photo.“No one messes with Dirty Soap! Mama said knock you out! #disn—a”It caused such a commotion that the pop singer took the photo down and then reposted it with a different caption that was obviously pointed at the people criticizing her.In her second post, she wrote: “Ok, let me try this again. #get off my d–k haters!”Madonna’s second post definitely rubbed many of her fans the wrong way due to the harsh tone she took to defend her actions. She has now issued an apology via her Instagram and Facebook page, which read, “I am sorry if I offended anyone with my use of the N-word on Instagram,” she said in a public statement posted on her Instagram and Facebook feeds. “It was not meant as a racial slur. I am not a racist. There’s no way to defend the use of the word. It was all about intention.”She also said, “It was used as a term of endearment toward my son who is white,” she wrote. “I appreciate that it’s a provocative word and I apologize if it gave people the wrong impression. Forgive me.”If you don’t remember, Madonna once said she always wanted to be black on the Arsenio Hall show many years ago. Maybe she feels that is part of the black experience. I’m just sayin’.https://youtu.be/iOwHJZtLgZ8