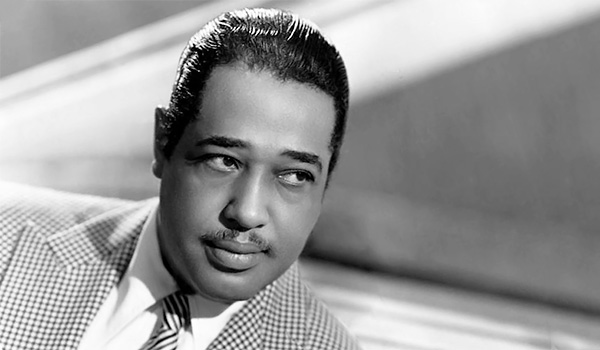 Legacy Recordings, the catalog division of Sony Music Entertainment, celebrates the life and music of Edward Kennedy “Duke” Ellington, honoring the American composer as Artist of the Month for Black History Month, February 2014.

A century ago, in 1914, a teenage Duke Ellington, working in Washington DC as a soda jerk by day and aspirant jazz musician by night, penned his first composition, “Soda Fountain Rag,” laying the cornerstone for one of the most expansive and important canons of American music to emerge in the 20th century.

The abiding romantic power of Duke Ellington’s music can be seen, heard and felt in the acclaimed “American Hustle,” one of this year’s Best Picture Oscar nominees, which uses “Jeep’s Blues,” as a key element in the film’s soundtrack. Cowritten by Ellington and saxophonist Johnny Hodges, “Jeep’s Blues” was first recorded in 1938 with the “American Hustle” version coming from Ellington At Newport 1956, an electrifying live album that continues to bring new audiences to Ellington’s music.

As further demonstration of Ellington’s enduring genius, a contemporary hit Broadway musical, “After Midnight,” features Duke’s music played by a 17-piece band, handpicked by Wynton Marsalis and is currently starring Fantasia. “After Midnight” opened in November to rave reviews testifying to the electrifying qualities of Duke’s music: “The #1 Broadway Musical of the Year!” (New York Magazine); “Smoldering! A sleek, elegant tribute to Duke Ellington and the glory days of the Cotton Club that brings class back to Broadway. You can’t help but THRILL!” (New York Post); “Dazzling!” (Associated Press).

Duke Ellington led his own orchestra from 1923 until his death in 1974, often performing 50 weeks a year, writing new compositions in a hotel room one night, rehearsing them with his group and performing them for a live audience the next.

During the half century he made music, Duke Ellington wrote more than 1,000 songs as well as film soundtracks (his score for Otto Preminger’s “Anatomy of a Murder” broke new cultural and aesthetic ground) and full-length concert suites. While many of his own compositions–“It Don’t Mean A Thing If It Ain’t Got That Swing,” “Sophisticated Lady,” “Mood Indigo,” “Solitude,” “In A Mellow Tone,” “Satin Doll”–have become standards and evergreens, Ellington and his Orchestra were also responsible for introducing songs like “Caravan” and “Take the ‘A’ Train” to the world.

While an undeniable force in shaping the history of jazz, Duke Ellington’s music is, according to the composer/recording artist, “beyond category.”