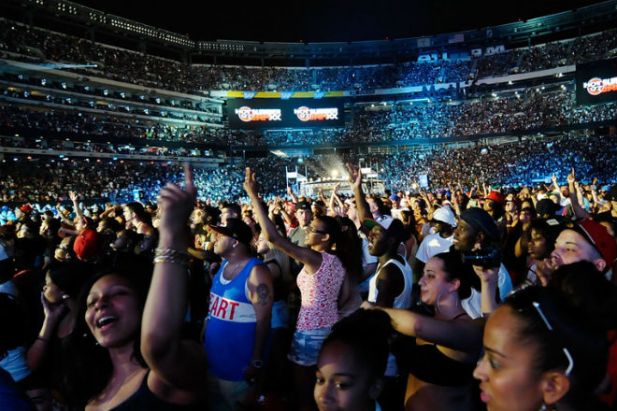 The Biggest Hip Hop Festival Goes Global – First Stop, Tokyo!
Wednesday, March 30, 2016 (New York, NY) – WQHT HOT 97 FM, the #1 Radio Station for Hip Hop and R&B, announced a monumental expansion of the Summer Jam brand, bringing the biggest Hip Hop festival there is to Tokyo in July 2016! HOT 97 signed a multi-year license agreement with Japan-based Avex Live Creative (ALC), Asia’s premier live entertainment and production company, a division of Avex Group Holdings. Summer Jam Tokyo is an extraordinary example of the strength HOT 97 and Hip Hop culture holds throughout the world, transcending beyond radio & music and into an experience for the audience. The opportunity to bring such a substantial event of this magnitude to Japan this year aligns not with only the influx of Hip Hop into the Japanese culture, but also the continuous rise in tourism Tokyo has experienced over the past few years. Summer Jam Tokyo will provide travelers, as well as locals, especially millennials, a new adventure in a country rich with history and tradition.
“HOT 97 Summer Jam Tokyo reinforces the global awareness and significance of the HOT 97 brand and the groundbreaking DJs who play such an important role in breaking and cultivating Hip Hop’s top past, present and, without question, future performers,” said Patrick Walsh, President of Emmis Communications. “HOT 97 has a passionate following in Japan and Hip Hop is experiencing enormous growth in popularity among Japanese millennials. We look forward to working with our partners to deliver an authentic HOT 97 Summer Jam experience to the growing legion of Japanese Hip Hop fans and share the experience with our American listeners as we promote the groundbreaking event to our audience in New York and all over the United States. Our goal is to add another significant event to a country so rich in history and culture.”
“I feel honored that we are able to bring HOT 97 Summer Jam, one of the world’s most reputable Hip Hop events, to Japan,” comments Katsumi Kuroiwa, CEO of ALC. “The demand for internal action has been increasing in Japan, and as we approach the 2020 Olympics in Tokyo, we expect to gain even more attention from the world. With the waves of globalization approaching from many directions and the demands for new experiences continuously increasing, the fact that HOT 97 Summer Jam, which represents New York’s Hip Hop culture like nothing else, is coming to Tokyo demonstrates how extremely treasured music festivals are and just how worldly Hip Hop is. This partnership will bring a taste of New York right into the center of Japanese art & music.”
“HOT 97 is the leading force in Hip Hop locally, nationally and soon, internationally,” states Charlie Morgan, Senior VP/Market Manager of Emmis NY/WQHT. “We embraced the International community, specifically Japan, through on-air programming a few years ago, and now we’re focusing on expanding our Summer Jam brand and live events. We’re excited for this new venture, and look forward to bringing Summer Jam to Tokyo this July!”
Ben Finley, Director of Global Business Development for WQHT/Summer Jam Tokyo, adds, “Japan is one of the most innovative and musically influential cultures in the world, embracing Hip Hop from New York, home of the largest collection of Hip Hop fans there is. So it’s only a natural fit for Japan to duplicate Hip Hop culture from its birthplace and HOT 97. In 2013, we introduced the International Hour, with featured-personality, DJ Lead, spinning a mix of America’s hottest Hip Hop and R&B artists as well as International hits from his home country, Japan. The response of the program was immensely positive, so we’ve taken it to the next step with Summer Jam Tokyo!”
As part of this arrangement for Summer Jam Tokyo, ALC will also utilize Trevanna Entertainment, the production team behind HOT 97’s Summer Jam at MetLife Stadium, which takes place Sunday, June 5, 2016.
Summer Jam Tokyo will take place Friday, July 29, 2016 at Zepp Tokyo. The line-up, which will not only include some of the hottest names in Hip Hop known throughout the world, but also the biggest Hip Hop acts in Japan, will be announced at a later date. For the most recent updates, including on-sale information, head to www.hot97summerjamtokyo.jp or follow Summer Jam Tokyo on Facebook at www.facebook.com/HOT97SummerJamTokyo.